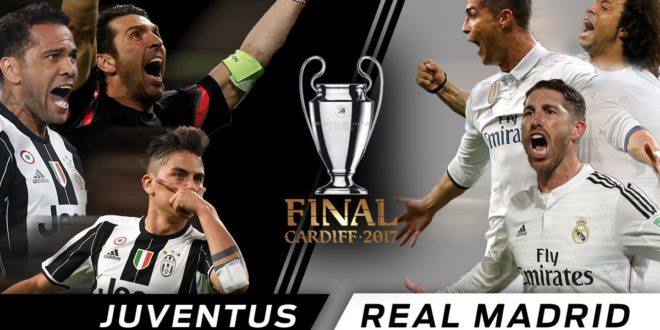 Nineteen years ago Real Madrid and Juventus met in the 1998 Champion’s League final. This Saturday these two giants of world football will battle it out again to be crowned kings of Europe and pick up the prestigious Champion’s League trophy in one of the greatest and biggest sporting events in the world. The final is always a special occasion but with records set to be made and broken on and off the pitch, world-class players on display, and the guarantee that both teams will attack with flare and intensity, this football spectacle is going to make fantastic viewing.

The Spanish team beat The Old Lady in ’98 to lift their then seventh Champions League trophy, so Juventus will be looking for revenge and a final win in Cardiff at the weekend to compete a magnificent treble of trophies this season having already won Serie A and the Coppa Italia. Real Madrid on the other hand will want to add to their La Liga title this term and lift their twelfth European Cup/Champion’s League trophy.

This showpiece will be a spectacle no football fan will want to miss. Whichever team wins, it will either be an incredible Juventus treble win or a dozen cups for Real Madrid which would be equally special. Records are guaranteed to be set and beaten, the football expected to be spectacular, this Champion’s League final is certain to live up to the billing. If you like to witness historic moments or you are a stat swot then there will be plenty of both to look out for on Saturday, or if you just want to be wowed by fantastic footballers then this is also the match for you.

A little piece of history will be made in Wales as the match kicks off at 19.45pm on 3rd June 2017. This will be the first time the country has ever hosted the final and if, as anticipated for security reasons, the roof is closed on the Millennium stadium, it will be the first final to be played with the covers on. Under a roof or not, Zinedine Zidane will be up against his former team Juventus. He played for The Old Lady from 1996-2001, losing the ’98 final to Real Madrid, the team he moved to in 2002 and now manages. He won the Champion’s League as a player for Real Madrid and he will be hoping on Saturday he can secure his second European title for the club as their manager. If he manages this feat, he will become the first coach in Champion’s League history to win the cup in consecutive seasons.

On the pitch, the stats do not bode well for Juventus. This weekend will be their ninth appearance in a Champion’s League final, having won the trophy twice in ’85 and ’96, they hold an unwanted record of being the team who have lost the most finals, six. The Old Lady will be hoping it will be a treble of European cups on Saturday as well as a treble of trophies for the season. One record Juventus will take heart from is they are undefeated in their last three matches against The Bernabeu club and if they play like they did in the quarter-final against Real Madrid’s La Liga rivals Barcelona, then the Serie A side could well secure a trio of Champion’s League victories rather than an unlucky seventh defeat. If they are going to avoid another final defeat however, they will have to keep an even bigger eye on Ronaldo than expected – he has scored against Juventus in every match he has played against them, and as the competitions all-time top scorer, the Real Madrid forward will be looking to add to his record 104 Champion’s League goal tally on Saturday evening.

While we digest the possibilities for one of the world’s greatest forwards, we must give a mention to the man who will be attempting to keep his shots out of the goal net, Gianluigi Buffon. The Juventus goalkeeper, one of the most outstanding and longstanding goalies in football history, has won everything in the game – apart from the Champion’s League. Incredibly this is the one medal that is not part of this footballer’s collection. Victorious with eight Serie A titles, three Coppa Italia cups, World Cup winner, as well as endless individual honours, at the age of 39, this could be Buffon’s last chance to win Europe’s biggest club prize. He’ll have to be at his best against one of the most outstanding forward lines on Saturday however, but if there is a goalie that can keep Ronaldo, Bale and Benzema out then it is Buffon.

Real’s front line will give the Italian shot stopper plenty to think about, but one of Real Madrid’s defenders should also be of concern. Centre-back Sergio Ramos will not only be looking for his third Champion’s League trophy, but he will also be determined to score to make him the only player to have ever netted in three Champion’s League finals. Ronaldo is also in contention for this record but if a defender held this feat it would surely be all the more special and incredible.

Two Juventus players who will see this final as more than a chance to end the season with a win in Europe’s biggest competition is Sami Khedira and Dani Alves. Both would relish beating Real Madrid. After falling out of favour at the Spanish club and leaving on a free transfer, Khedira would enjoy a final win against his old club. Alves desire to beat Real Madrid, having played for Barcelona for eight years, needs no explaining. Also, a win would see both players having won the Champion’s League with two different clubs – only a select group of thirteen players have ever completed this achievement. Khedira has one medal from his time with Real Madrid, Alves won the trophy three times with Barcelona.

Records will be set, records will be broken, a grudge match for some, the last chance for Champion’s League glory for others, but one fact is for sure, this final will certainly be one of the greatest with an array of world-class players on display and, one way or another, it will go down in European footballing history.