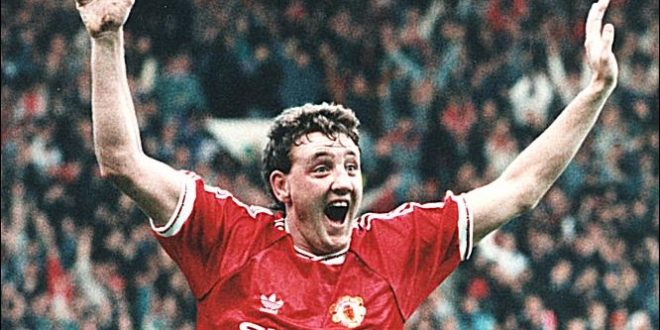 It is 30 years since Steve Bruce signed for Manchester United. The Corbridge born man achieved so much and set numerous records during his great footballing career, but one piece of history that Bruce will remain famous for and can never be rewritten is that he was the first captain to lift the Premier League trophy. As England’s top division celebrates and reminisces over its 25 year landmark – the greatest goals, the best players – it is the former Manchester United centre-back that will have the fondest memories as he holds some of the most historic moments from the beginning of the new Premier League era.

Not only is it the 25th anniversary season since Bruce won the first Premier League as captain of Manchester United, but this year is also 40 years since the centre-back joined his first club, Gillingham – 10 years later signing for Manchester United and enjoying the best and most successful moments of his career. He would have to be considered one of Sir Alex Ferguson’s best signings, costing the club a mere £825,000 from Norwich, Bruce went on to become a fantastic centre-back for United and an integral part in winning three Premier Leagues, two FA Cups, one League Cup and a European Cup Winner’s Cup. He would go onto make 414 appearances for The Red Devils and score 51 goals but amongst all those achievements, two matches in the Premier League’s debut season are the most significant for ‘Brucey’ as well as for Manchester United, and the former Old Trafford defender will be fondly remembered for creating some of the most momentous moments in United and Premier League history.

A 26 year wait for a league title hung over United and Old Trafford like a black cloud, an unwelcome record in their glorious history. Having come close to breaking the unwanted tag on occasions, the new Premier League era was the perfect time to take the club’s first league title since the days of Sir Matt Busby at the helm. But coming top is no easy feat and the 1992/93 season was between three teams for much of the term, Man United, Aston Villa and Norwich City all vying to win the first ever Premier League title. With six games to go until the end of the season, the three teams were still neck and neck at the top of the table. Match weekend 33 saw United up against Sheffield Wednesday at Old Trafford, Norwich were away to Spurs while Villa took on Coventry at home. The Canaries lost 5-1 on the Friday night giving the Midland’s club and United the chance to pull away on the Saturday, cue Fergie time, last minute Old Trafford goals and Steve Bruce’s most important four minutes in a United shirt.

A chance to get back to the top of the table looked destined to be conceded by United as the match at Villa park ended 0-0 giving the Midland’s club the advantage. At this point The Red Devils were 1-0 down to The Owls after a 65th minute penalty was converted by John Sheridan, the match was drifting away from United until an unlikely scorer in the shape of Bruce scored two of the most meaningful and momentous goals in the club and Premier League history.

In the 86th minute the Old Trafford faithful went wild when Bruce powerfully headed into the net from a Dennis Irwin corner, 1-1. United poured forward for the winner, and it was Bruce again who grabbed another header deep into injury time. A 96th minute goal from the centre-back sent Old Trafford into pandemonium, Brian Kidd and Sir Alex Ferguson onto the pitch punching the air, and Manchester United two points clear in the first ever Premier League table.

Everyone associated with United dared to dream the title would be finally coming back to Old Trafford after just over a quarter of a century. On 2nd May that dream came true when Aston Villa lost 1-0 to Oldham confirming The Red Devils and Steve Bruce had won the title – the new Premier League trophy was to have its first club engraved on it, Manchester United – signalling Steve Bruce’s second most historic moment in his football career.

The day after becoming champions, Steve Bruce captained United to a 3-1 win over Blackburn Rovers at Old Trafford. Under the watchful and teary-eyed Sir Matt Busby, the last manager to win the title with The Red Devils, and a packed Old Trafford, Steve Bruce became the first captain to lift the Premier League trophy. However, to make this historic occasion even more momentous, Bruce being a great captain and gentleman that he is, held the trophy aloft with Bryan Robson – the man named captain at the start of the season but due to injuries made very few appearances for the team, hence Bruce occupying skipper duties.

Two goals to cherish and headers that have gone down in the United and Premier League history books, as well as being the first man wearing the captain’s armband to lift the Premier League trophy, the debut year of the Premier League will live in the memory for so many reasons, especially if you are associated with Manchester United, and it will always have great significance for Steve Bruce as it holds some of the fondest and greatest moments in this United legend’s fantastic footballing career.