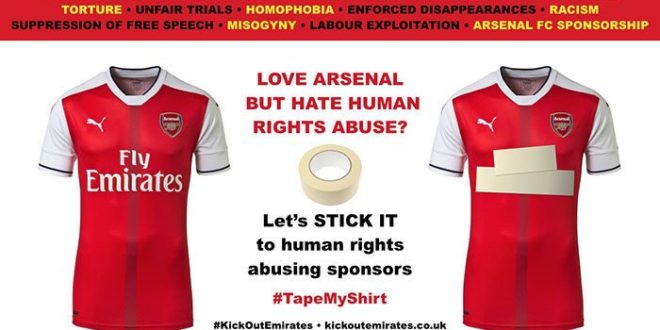 Many football fans probably don’t look in too much detail at the brand name that appears on the front of their football shirt. For fans they’re more interested to know how much money the club is receiving in form of shirt sponsorship, with the hope that the hundreds of millions of pounds (if you’re lucky enough to support a top Premier League side), gets invested into the purchasing of high quality footballers in a bid to bring them silverware next season. Not many fans will stop to think about the actual sponsorship company itself – at least not past the fact that “they’re an airline” or, “they’re an online bookmakers”. And it’s equally unlikely that they’ll look past the business sector and instead into the more ethical areas of a company, such as it’s green credentials, or the way in which they treat their employees.

And this brings us on to a campaign that we’ve recently been made aware of, but which has been running for a while, targeting Arsenal‘s club sponsors Emirates. The International Campaign for Freedom in the United Arab Emirates (ICFUAE) is a London-based group which campaigns for human rights, democratic reform and freedom of expression within the United Arab Emirates. So far they’ve been campaigning in some of Arsenal’s games this season, including their FA Cup Semi Final against win against Man City.

The aim of this campaign? To raise awareness of the human rights abuses being carried out by Emirates Airline, plus its owners the Dubai Government. You can read more about their campaign on their website, KickOutEmirates, as well as the Amnesty International annual report on the UAE.

The FA, who at times are keen to be seen publicising their “Kick It Out” campaign targeting racism within football, seem to turn a blind eye to the likes of torture, enforced disappearances, unfair trials, suppression of free speech, and plenty more, all when a big sum of money is involved – Emirates paid £30 million to the FA to sponsor the FA Cup competition for 3 years. 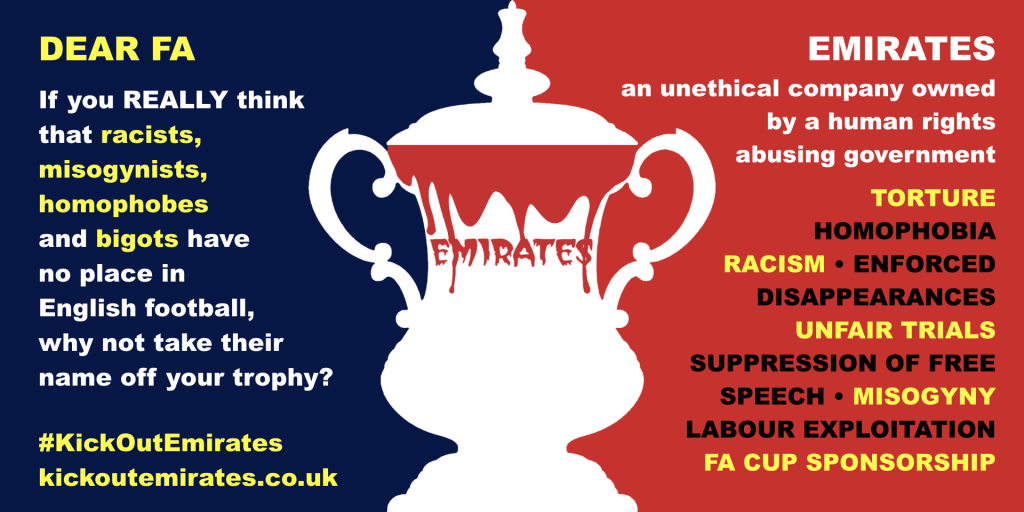 So what is going to happen at Wembley?

If you’re an Arsenal fan planning on going to the FA Cup final then to get involved with the campaign all you need to do is tape up your Fly Emirates logo on the front of your Arsenal shirt, in protest of the way the UAE treats it’s people.  Make sure you use masking tape (instead of duct tape) to prevent any damage when removing it from the shirt. On Saturday 27th May campaigns will be outside Wembley handing out strips of masking tape from 3.30pm. But if you want to save a bit of time you should have a go yourself, as you’ll probably be in a bit of a rush to get inside the stadium in time for the big show.

ICFUAE are calling on football fans and activists to spread awareness of this action, particularly amongst Arsenal fans. If you’re planning on going to the game and you want your shirt taped, and a picture tweeted (using the #TapeMyShirt hashtag), then you can contact maria (at) ICFUAE.org.uk. If you wanted to get involved in the action outside the stadium, helping to find willing fans and to explain the campaign to them, then the people at ICFUAE would love to hear from you.

Get involved by sharing this post on social media with #KickOutEmirates, or follow @KickOutEmirates to keep up to date with the latest news from the campaign.
Arsenal emirates kickoutemirates tapemyshirt 2017-05-19
+Matt
Share