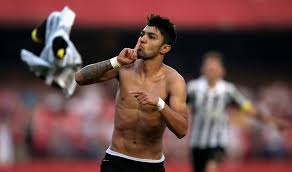 After falling short in their pursuit of Leicester forward Jamie Vardy, it appears that Arsenal have set their sights on one of the most coveted young players in world football. Having been linked with every elite franchise under the sun,  the gunners have seemingly leapt to the front of the queue as their recruitment drive continues following the addition of Switzerland talent Granit Xhaka back in May.

The player in question is Santos’ Brazilian forward Gabriel Barbosa, who at 19 years old has swept through Brazil’s top tier in mesmeric style. Despite his release clause being rumoured to stand in the €50million region, he is believed to have a buy-out clause inserted in his contract which would allow European clubs to acquire his services for an appealing £15million.

Having already reportedly rejected interest from the alluring wealth of China’s Super League, the teenager is understood to favour a move to North London. With ESPN Brazil suggesting that Arsenal have already initiated negotiations, Santos president, Modesto Roma, has stated that the club will do their utmost to keep hold of their prestigious young talent. The player’s agent, Wagner Ribeiro, has been quoted as stating that the player himself believes that he is too young to move abroad, but a project at one of Europe’s elite may yet convince him to change his mind.

Gabriel, who has 2 goals in 4 appearances for his national team, was called up to Brazil’s Copa America squad by coach Dunga and will next be seen participating in his national team’s home Olympics campaign. With Arsenal chief Arsene Wenger signalling his intention to add to his squad, it appears the clamour for a new forward may be approaching its conclusion.

Not to be confused with Geoffrey Rush’s character from Disney’s Pirates of the Caribbean, more commonly known as Gabriel or Gabigol, the Brazilian teenager has been plying his trade in his homeland’s top tier since making his debut as a 16 year old. Stemming from the famed Santos FC youth setup, comparisons to former club icons Pele, Robinho and Neymar soon followed as Gabriel’s dazzling array of tricks consistently startled his home faithful. Having scored 54 goals in 148 appearances, he has since forged a reputation as a thrilling yet deadly attacker, showing the composure of a more seasoned professional.

Predominantly left-footed, he is often seen cutting in from the right wing, searing towards goal or finding his team mates in space using his proficient technical ability. Although the ‘new Neymar’ tag persists, Gabriel’s more powerfully built frame allows him to use his strength when confronted with defenders, dismissing fears of potentially being bullied by Premier League defences. Bestowed with the creativity and flair of a typical Brazilian forward, his unpredictability would be an asset to any team. Like Neymar, Gabriel possesses sublime vision, drifting infield from his flank to act as a playmaker. While his decision-making will require refining, his talent is evident.

Where would he fit?

Whilst the gunners created more clear-cut openings than any other side in England’s top flight last season, their lack of clinical finishing along with an absence of finesse in the final third has led to reinvigorated demands for a world-class striker to be acquired. With regular frontman, Olivier Giroud, often maligned for his dearth of mobility, the Brazilian attacker would inject pace and sparkle to the Arsenal strike force.

Capable of playing anywhere across the front line, Gabriel would bring versatility and offer the spark many critics believe Giroud to lack. Despite his tender age, Gabriel has assumed the mantle of responsibility at Santos, driving his team forward and evolving into a genuine match-winner. Having outscored pricey forward Leandro Damiao by 10 goals for Santos, he will not be fazed by the competition a transfer to North London would bring. With Alexis Sanchez on the opposite wing and the genius of Mesut Ozil beside him, fans will be salivating at the prospect of seeing his talents at the Emirates next year.

A preview of Gabriel’s virtuoso brilliance….