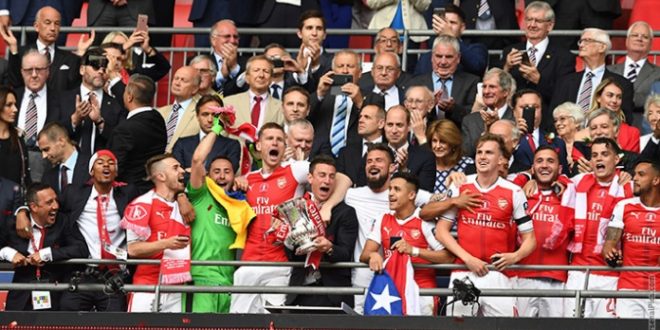 On the 27th May 2017 Arsene Wenger captured his seventh F.A. Cup and Arsenal’s thirteenth whilst it also is their third in four years. This came six days after Arsenal failed to secure Champions League football for the first time in twenty years. This happens after years of people criticising Arsenal and Arsene Wenger for treating the achievement of getting in the top four like winning a trophy. This criticism, mostly came before their 2014 F.A. cup win when they went nine years without winning any competition, but still managing to confirm Champions League football every single year. Now they’re in the reverse position with a trophy but no spot in Europe’s most prestigious club competition to look forward to. So, it begs the question what is more important winning the F.A. Cup or playing in the Champions League?

For the players currently playing for the club they’re not going to look back on their career and think ‘wasn’t it a great time when we finished fourth in the league’. They may however, look back on a successful cup run and take pride in that achievement. That’s not to say they won’t be disappointed in not getting into the Champions league because when they sign for a team like Arsenal they expect to play in that competition. Especially players like Mesut Ozil and Alexis Sanchez who both signed from big clubs, they probably expect to not just to play in it, but to be a contender in the Champions League (as misguided as that may be with it being quite a while since an English team was amongst the favourites in the competition). Obviously, I don’t know the personality or mindset of the individual players and some may actually prefer getting into the top four, but you’ve got to think that the majority of the players would consider winning the F.A. Cup a bigger achievement. Even though they might not feel that way next season when they’re travelling half way across Europe to play in the Europa League on Thursday nights.

Having Champions League football has a bigger effect when it comes to potential signings. As any players Arsenal will try to sign won’t really care that they won the F.A. cup before they arrived as they weren’t there for that. Maybe it’ll prove to any potential new players that Arsenal can win trophies, but they have already proved that in the past. What the player will really care about is what can the club do in the future. Whereas if they were in the Champions league they could already guarantee the player that he’ll get to play in the competition. The F.A. Cup isn’t as big of a bargaining chip as guaranteed Champions League football. This isn’t to say however that teams without Champions League football can’t attract big players as Manchester United showed last summer when they bought Paul Pogba after a season where they finished 5th and won the F.A. Cup (not too dissimilar to Arsenal’s season this year). Pogba left Juventus where he was guaranteed a title challenge every year (with how Juventus have been in recent years it, actually pretty much guarantees a title) whilst Juventus also play in the Champions League every year. So, going to a team in the Champions League might not be the be all and end all for all players but it certainly can be a bonus.

Arsenal fans were disappointed with how their team’s season turned out, but not because they didn’t get into the top four but because they didn’t win the Premier League. They have never seen the top four in the same way that the club sometimes does, they go into every season demanding that their team wins the league again. They only ever celebrate the top four when they can no longer mathematically win the league. Yes, they will be upset that Chelsea, Manchester United, Manchester City, Liverpool and Tottenham (especially Tottenham) are all in the Champions League and they’re not. Also, they’ll always prefer Champions League football to Europa league football, but they saw their season as a failure before they were confirmed to finish fourth. They share this sentiment when it comes to the F.A. Cup as well as they see the cup as a secondary prize behind the primary targets of winning the Premier League or winning the Champions League. However, they do see it as a ‘prize’ whereas they see coming fourth as consolation for an underachieving season. I think the Arsenal fans will always see winning a trophy as more important than coming fourth and they certainly took more joy in Aaron Ramsey’s winner at Wembley than they ever did for confirming that they were the fourth best team in the league.

Arsene Wenger position as manager was up in the air before the F.A. Cup Final which led to some question dodging on his part after the victory over Chelsea. A couple of days later however, it was announced that he was signing a new two-year contract. It’s unclear how important the F.A. Cup victory was to that, but it would have been interesting to see if he would have got the new contract if they’d have missed out on the top four and lost the final. The Arsenal owners have always been able to justify keeping Wenger around because of the constant Champions League football he delivers and now it seems that they’re able to use the F.A. Cup success in the same way. This won’t work on the ‘Wenger Out’ crowd though who have been more vocal than ever this season with constant banners flying over stadiums to an abuse of the ‘WengerOut’ hashtag on Twitter. Some of these fans would’ve preferred to actually lose the final and miss out on the top if it meant Arsene Wenger was no longer the manager at Arsenal. Which brings up the question can Arsenal succeed going forward? Will there be an article next year not comparing the top four to the F.A. Cup but instead talking about how Arsenal won the league? Well Arsene Wenger claimed during the season that the fans’ negativity had been affecting the players’ performances which means that when he signed that two-year contract he must of thought that he could bring them back on his side. He could try doing this by going and making a big marquee signing as that’s something his critics has always wanted him to do. However, I think they want more than that now and the only way for him to win back full support is to at least challenge for the title next season and end the season with Champions League football AND a trophy not one or the other.

So, what really is the most important? Winning the F.A. Cup? Or Being in the Champions League? Well Arsenal spent twenty consecutive years in Europe’s biggest competition with no winner’s medals to show for it. They’ve spent the last few years getting knocked out and sometimes humiliated (like against Bayern this year) by bigger teams than themselves (and once against Monaco). Arsenal are a team who should want to win things, whether its cups or league titles that should be the aim. Yes, they want to be in the Champions League as well, but one season out of that competition won’t do them harm. It may allow them to refocus and change things (not their manager though apparently). Then come back stronger next season and if possible qualify for the Champions League through winning the league. Which is what matters most because no team like Arsenal should celebrate coming fourth, but every team should celebrate winning a trophy.