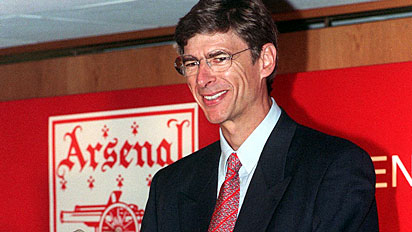 Arsene Wenger- A Genius Beyond Question

You only have to listen to players past and present when they speak about Arsene Wenger to learn just how respected he is amongst those that know and have worked with him. In a recent interview with Ian Wright, Sol Campbell and William Gallas, the look of adoration in Wright’s eyes is analogous of a lovestruck teenager, awed in the presence of their idol. In a world where loyalty scarcely exists in football, it is easy to see just why Jose Mourinho’s obsession with Wenger masks his envy. You can be sure that there are a list of clubs as long as your arm that have attempted to pry Wenger away from his beloved Arsenal. You can be as equally sure that Wenger has probably kept a record of the exact dates and times of said proposals, such is the meticulousness of the man’s nature. Even at the age of 67 there is still about as much chance of Arsene Wenger’s dedication to football dwindling as there is his perfectly coiffed hair waning. Why then, does such a prominent figure in English football have to constantly be alive to, more often than not, baseless scrutiny.

Naturally, it is easy to be downcast as a fan; having to watch your rivals encroach upon your best players, dangling lucrative contracts, while your supposed heroes prattle on about fulfilling the type of life long dream that only an extra couple of zeros on their salaries can offer. Riots have been incited for less. It is easy to blame the manager; as if he unmindfully waved them off with one hand and jingled the pocketed cash with the other. Nevertheless, it is a gross injustice to suggest that Arsene Wenger is simply unwilling to spend money. The reality is a far cry from the gagsters that continuously attempt to project him as some sort of penny-pincher. The truth is simple, while the other clubs were out lavishing the cash around, Arsenal had a new stadium to finance and money had to be recouped. When they had finally managed to pay off their debts; for what is arguably the best stadium in the league, did Arsene Wenger offer magic beans for Mesut Ozil? Did he offer to pay for Alexis Sanchez with compliments? These are two of the finest players around, so it is hardly as though Wenger organised a random line up, blindfolded himself and threw money at whatever players his finger landed on.

Yes, we are constantly reminded of his failure to buy a ‘world class’ striker, but that isn’t down to a phobia of mesmeric centre forwards. You can be sure that there is a marriage between that, a lack of sufficient funds, and Wenger’s sometimes misplaced belief in what he already has. It has been a vicious cycle. If you need to finance a new stadium and you have to sell some of your top earners to fund it, rightly or wrongly, Europe’s best talent are unlikely to flock to your club, and so, on a whole, you are unlikely to be able to keep pace with the clubs around you that can entice these players. It also needs to be documented that the majority, if not all of these ‘world class’ forwards are already playing for clubs of equal, or superior stature. With it being extremely difficult to lure these players with promises that their current club can already likely offer them, you can end up being quoted laughable prices for players simply aping the top strikers. Arsene Wenger is never likely to waste money on imitations. Unfortunately, there are no prizes these days for endeavouring to be resolute in a market,without any real sense of value.

It is actually rather remarkable though, that Arsenal have managed to stay within touching distance of their rivals without the endless expenditure. Alas, how unfashionable it must be to consistently finish in a Champions League position in every single season since the Premier League’s inception. That isn’t to say that Wenger’s trophy cabinet shouldn’t be slightly more filled, there has been a brittleness to Arsenal in recent times that has denied them one or two more trophies that they ought to have won. There is a dormant argument, waiting to erupt every time you mention Arsenal and last season, as if somehow they wittingly laid out the red carpet for Leicester to win the title. Not only is that ignorant of Leicester’s anomalous feat, but it also suggests that they somehow came from nowhere to steal the title. Frankly, Leicester were consistently good, and if anything, that should be a testament to the excitement of the league, not a scolding of Arsenal, as if they were the only team to underwhelm. However, before the Anti-Wenger protesters agitate for his removal once again, they should remind themselves at what has manifested at Old Trafford since Sir Alex Ferguson retired. The ‘grass isn’t always greener’ immediately springs to mind.

Arsene Wenger has always divided opinion, not least when the prospect of his arrival into English football sent a shudder down the spine of the staunchly English Premier League. Only now, people are forgetting just what he introduced to English football, as if Pep Guardiola has suddenly implemented a revolutionary new style. Suddenly, he has become obsolete, his managerial capabilities outdated. ‘It is time for Arsene to go’ can often be heard. As he ponders the prospect of perhaps signing a new contract for at least one more year after this one, both Arsenal, and football fans alike should be absorbing every intricacy of his wisdom while they still can, because one thing is for sure, he will be sorely missed when the curtain finally comes down on his time at Arsenal.