Home » News » Burnley Give Hope To The Chasing Pack 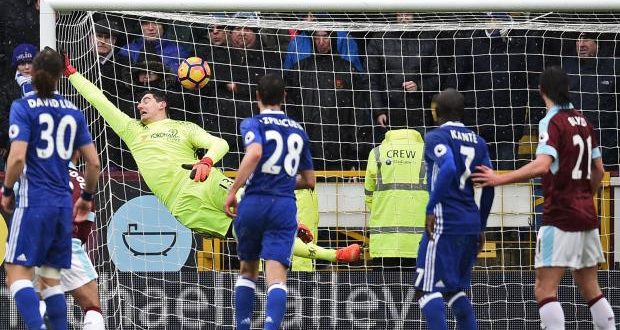 Burnley Give Hope To The Chasing Pack

A spirited performance from Burnley slowed down Chelsea‘s title charge as a splendid Robbie Brady free kick earned Dyche’s men a 1-1 draw at Turf Moore. The draw kept Burnley’s impressive home record intact, as the Clarets have picked up 29 points at home.

Chelsea were looking to extend their lead at the summit to 12 points at Burnley and they started off in quick fashion with Pedro giving the Blues an early lead with clever finish on the 7th minute. Good work from Victor Moses on the wing allowed Pedro to find space and slot in his 9th goal of the season so far. Chelsea looked to be strolling to a comfortable victory until the 24th minute when a Burnley free kick lead to a wonderful debut goal for new signing Robbie Brady.  The Republic of Ireland International completed a club record move on deadline day and looked to show the Burnley faithful why he was worth the outlay.

Robbie Brady's goal against Chelsea is a thing of beauty ???? pic.twitter.com/S4ALB87aJT

Chelsea struggled to break down the Burnley back line and failed to muster a single shot on target in the second half and only manged two efforts on target all game despite having the majority of possession. Tame efforts from the likes of Hazard were the closest Chelsea came to regaining the lead, with Burnley’s center back pairing of Ben Mee and Michael Keane providing stand out performances. Burnley will attempt to win their first away game the season when they travel to Hull in their next league fixture, while Conte’s side will look to get back to winning ways against a resurgent Swansea team at Stamford Bridge.

Liverpool, Arsenal and Manchester United kept their faint title hopes alive with comfortable 2-0 home wins against Spurs, Hull and Watford respectively. Mané proved to be the main man for Liverpool as they dispatched Tottenham at Anfield. The damage was done within the first 20 minutes of the game as a quick fire brace from Mané put Liverpool back in the top four. Arsenal’s own main man Alexis Sánchez celebrated a brace of his own as the gunners recovered from last week’s damaging defeat to Chelsea. There was controversy surrounding the opening goal as the ball looked to of gone in off the arm of the Chilean international. United also maintained their unbeaten run and goals from Juan Mata and Martial ensured United moved to 48 points trailing second place spurs by only two points.

Manchester City have the chance to close the gap on Chelsea to eight points when they travel to the Vitality Stadium to face Bournemouth on Monday Night.