Home » News » Can The Old Lady be Toppled? 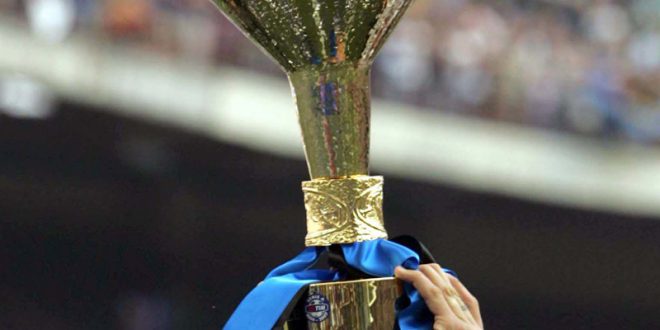 Can The Old Lady be Toppled?

The new Serie A season is only two games old yet talk of Juventus winning a seventh straight Italian title is already underway. Fans of Italy’s top league would say normal service was resumed in the first match of The Old Lady’s campaign, a 3-0 home win over Cagliari and it would appear Juventus are going to be unstoppable again. They are odds-on favourites to finish the 2017/18 season top, 45% to take the title, compared to Napoli 18%, Roma 17% and Inter 8% – odds taken from FiveThirtyEight.com. With six years of total dominance and previous seasons of supremacy in Serie A behind them, can any team realistically catch the Italian giants? After so many failed attempts you would think the challenging teams would have worked out the formula needed to topple The Old Lady by now, but with strengthened squads and expectations high, maybe they have, is this the season Napoli, Roma, Inter Milan or another big club in Italy take the title from Juventus? It will not be an easy feat but whichever team ends up top, this season’s Serie A could turn out to be one of the most exciting yet.

One factor in the Juventus team and their title defence is the loss of two key players. Leonardo Bonucci has left for Milan, he has been the main man at centre-back for The Turin club for the past seven years and his experience and excellent defensive displays will surely be missed, but perhaps more so will be the player who many say was the difference in the club securing a sixth title last season, Dani Alves. However, with excellent depth in the squad and a manager in Allegri with great experience in the game, you wouldn’t rule out another Juventus title. Two wins already in the league and The Old Lady are up and running – coming back from two goals down against Genoa to win 4-2 shows the desire and talent in the team is still there to be champions, but judging by the way the season has started, a number of teams can certainly make the race to winning the Serie A title a thrilling watch this season and they have already shown they have the talent and ability to take Juventus’ crown.

Napoli have to be considered as one of the favourites to challenge for the Italian title this season. The Gli Azzurri started their campaign with excellent 3-1 wins against Hellas Verona and Atalanta, and although the club have not added to the squad, the bigger factor is they have not sold any players, keeping the core of the fine team they have been building together. Keeping footballers like Dries Mertens could be key, the team now know each other well and they have an established first eleven, going forward in attack, the San Paolo club look fantastic. Finishing only five points behind The Old Lady last season and playing two close matched games with the Turin side, a 2-1 loss and a 1-1 draw, Napoli will feel they have much to prove this season and will be gunning for their first title in 28 years.

The two Milan clubs will feel they have a great chance of stopping Juventus clinching their seventh title. AC Milan have spent £200 million this summer bringing in ten new players including Bonucci – the man Juventus are certain to miss in their side. Frank Kessie from Atalanta is a strong young signing, high quality transfers have put AC Milan in a great position to challenge at the top, the only question mark being with so many new players, can they gel and integrate together to contest the league title? Their strength and depth is now significant and a good start to the new season resulting in two wins out of two will have given them confidence they can make their first eleven combine quickly to mount their challenge.

As for Inter Milan, they look stronger than ever. A convincing 3-0 win in their first game of the season against Florentina was followed up at the weekend with a 3-1 win over possible title rivals Roma. It was the first real test for both Serie A championship contenders and the biggest match of the new season so far, but it was Inter who showed their class and character after going 1-0 down, they fought back to clinch the win excellently with three well taken goals. Having not won the Serie A title for eight years, and finishing seventh last season, something that is not good enough for a club of Inter Milan’s stature, the Nerazzurri will feel this is their time to get back to winning Italy’s top league and dominate like they did during the mid-to-late 2000 decade with back-to-back titles.

Roma are the final team that have the ability to mount a substantial challenge on The Old Ladies bid for Serie A glory again. Finishing four points behind Juventus last season, the Giallorossi pushed the Turin club up until the final few weeks of the 2016/17 season before failing in their bid to capture their first title since 2001. With top Serie A scorer from last season Edin Dzeko up front and executing an excellent goal against Inter Milan, despite losing the match, Roma have a man to hit the back of the net, but will that be enough to take the title back to the Stadio Olimpico come May? With club legend Totti now retired from the game, the loss of his experience and class will do doubt have an effect on the team, and only narrowly winning against Atalanta on the opening day of the new season and a loss to title rivals Inter, will cast uncertainty over the club’s title bid, however, there is a long way to go in the Serie A season and Roma have the ability to be a contender and overcome their first defeat of the season.

With several realistic great challengers to the Juventus crown, the thrill of Serie A is certainly back this season. It will be a fantastic league to watch with at least six teams all vying for league glory. There is no doubt Juventus will be the team to beat again and they will be gunning to win a seventh title, but it would seem this season other top Serie A clubs are stronger and even more determined than ever to topple The Old Lady, guaranteeing exciting times ahead in the race for the Scudeetto.