Home » News » Can Ranieri lead Leicester to the impossible? 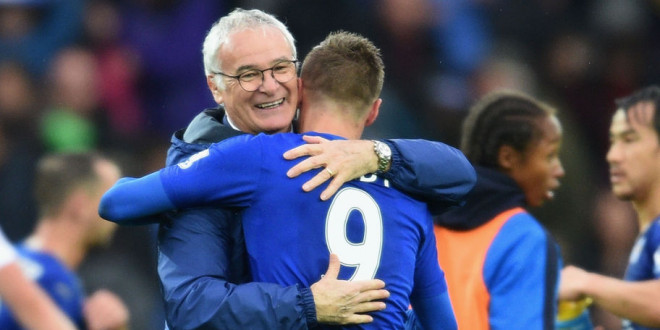 Can Ranieri lead Leicester to the impossible?

What a start to the season for the Foxes. After 13 games, Claudio Ranieri’s Leicester City sit pretty at the top of the table, one point ahead of favourites Manchester City and 14 points ahead of current holders Chelsea.

The emergence of Jamie Vardy has certainly been the highlight of City’s season so far, as he looks to beat Ruud van Nistelrooy’s record of scoring in 10 consecutive Premier League games this weekend, after equaling the feat against Newcastle on Saturday.

And it is against van Nistelrooy’s former club Manchester United that the striker could break that record, but it seems unlikely. Van Gaal leads a United side with the best defensive record in the league, conceding just 9 goals this season. And with the superb form of De Gea in goal, expect Vardy to struggle this weekend.

Nevertheless, it has been a fairytale campaign for the Foxes. Only four teams who have sat top in November have not gone onto win the title. But does that make them genuine contenders for the Premier League?

Ranieri is not getting ahead of himself, and remains adamant that survival is still their priority. It is easy to see why.

The manager told the Telegraph: “I have a duty to keep our feet on the ground. We will aim for 40 points and then we will see.”

Soon Vardy will stop scoring, the feel-good factor will eventually wear off and the points will start to dry up. The start of the season has been far from a fluke, but they do not have the strength in depth nor the tonacity to ‘win ugly’ to win the league or come close to it.

Ranieri will be praying Vardy stays fit over the Christmas period. Leicester face a host of top teams in their next eight games, including Manchester United this weekend and the likes of Chelsea, Everton, Liverpool, Manchester City and Tottenham coming up.

An injury to Leicester’s star man could prove calamitous for the Foxes, but it takes more than one striker’s astonishing form to be top of the Premier League after being bottom back in April. Ranieri and his team are leading the pack because they deserve to be there.

But with only two clean sheets so far this season, expect Leicester to slowly but surely fall.