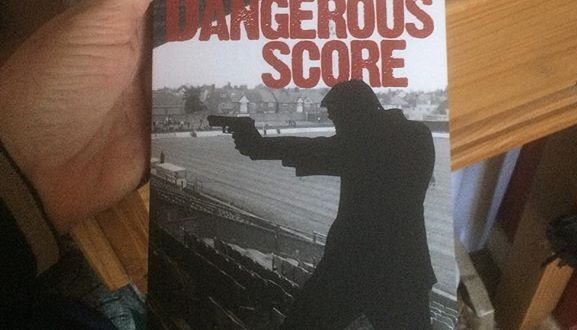 Dangerous Score is a crime thriller set in the footballing world of non-league. It is written by Michael Bearcroft who was a junior footballer with Sheffield United and had involvement with Northamptonshire football clubs both as a chairman and as a sponsor, so this man certainly knows his football which he has cleverly intertwined with an exciting, intriguing story which runs alongside a sub-plot involving a player/manager of a non-league club. The twists in this story, of which there are as many as there are Premier League titles in the Old Trafford trophy room, are smart and gripping. The combination of football corruption, the thrill of winning a match and promotion, to the highs and lows of love and life on and off the pitch, will have you turning pages quicker than a Ronaldo dribble.

Impressively, every chapter had a new development, albeit perhaps a little far fetched at times, but overall, Bearcroft has created a likable, strong character in his protagonist Jason Cooney, who any reader would be rooting for as he deals with the positives of scoring a promotion winning goal and finding his perfect woman, to the negatives of fending off his antagonist Threasham, who is one of the games crooks. All of these plots and sub-plots are drawn together perfectly; imagination, story ideas, and creating a worthy tale are Bearcroft’s definite strong points and he pulls these off expertly.

If you like to read novels purely for a good, well told tale, then this is the book for you – romance, crime, thrill and captivation – it has it all. However, if you look for more than just a great read, where the dialogue and descriptive writing is of an experienced writer and the characters/conversations/descriptions are brought to life, then you might be left a little disappointed by Dangerous Score.

A writer’s golden rule is ‘show’ not ‘tell’ but I am not sure Bearcroft is aware of this ‘must’ in story telling. ‘Telling’ the reader his breakfast/meal was ‘brilliant’ (and boy does Clooney eat a lot of unhealthy food for a footballer can I add!) is disappointing – brilliant how? What is brilliant? Repeated words like ‘so, so good’ where the ‘so, so’ is unnecessary are a little tedious, and while on the subject of repeating, I really didn’t need to know every time Clooney eats/showers/checks his emails/messages or has sex! All of which he seems to do more of at some points than concentrating on the job in hand – being a player/manager!

Overall, the plot moves well and as a story, it is a very clever imaginative tale which Bearcroft tells excellently. The football knowledge and thrill of the game is expressed much better than other descriptive text and dialogue, and as a football fan, I really relished a soccer story and the football side of it, the tale of a man sacked after winning promotion then being offered the chance to play at, and manage a club, makes the main plot captivating.

If you lean towards a well told novel than being bothered by the creative writing side then you will certainly find the plot pulsating. For any footy fan who wants a good solid read involving the beautiful game with added spice, a little romance and darkness, then this is a must read. In conclusion, Dangerous Score is Premier League quality with the potential to qualify for the Champion’s League.