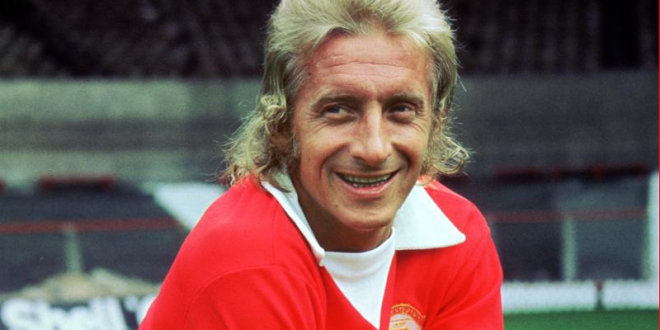 It is 55 years since Denis Law signed for Manchester United and formed one of the greatest, most prolific, and iconic frontlines in football history. Recently, this sensational Old Trafford legend was instated into The National Football Museum’s Walk of Fame, another achievement to add to this great Scots magnificent football career as well as to the historic and prestigious Denis Law story…

The first ‘King’ to grace the Theatre of Dream’s pitch, Law played for both the red and blue side of Manchester, but his 11 year stay with The Red Devils, as well as his flamboyant goals and magnificent ability on a football field, made him a United idol as well as a star that will always shine brightly in the hearts of the red half of the city.

Law lived a modest life as a child. Born in Aberdeen, Scotland, on 24th February 1940, he started his football career at Huddersfield Town at the tender age of 14 years old, his outstanding forward play and talent on the ball already evident. He would transfer to Manchester City in 1960, but may well have ended up at Anfield if circumstances had turned out differently. Bill Shankly managed Law for two years during his time with The Terriers, and if Liverpool had been able to meet the asking price for the striker, Shankly would have taken Law to Anfield with him when he moved to the club in 1959. So instead of a transfer to the red of Merseyside, Law moved to the blue side of Manchester for his first stint at Man City.

After one season at City followed by a disastrous year with Italian side Torino, Law said he was ‘delighted to be back in Manchester’ when he signed for United and Sir Matt Busby in 1962. ‘Got you at last son!’ were Busby’s words after Law had signed on the dotted line, the fellow Scot responded to his manger by saying he was ‘overjoyed to be working with someone he trusted and respected.’ Not only was Denis Law looking forward to being managed by Busby, but he also loved playing attacking football – the Scot was in the right place for his favourite style of play and Manchester United, as Busby put it, had ‘the most thrilling player in the game.’ The rest is history as they say…

‘If you had to send somebody out to score a goal to save your life, there could be only one man – the Lawman,’ this was United’s assistant manager Jimmy Murphy’s take on the club’s new striker and he certainly lived up to that compliment with a goal seven minutes into his incredible Manchester United career. He scored his first Red Devil’s goal in a 2-2 draw against West Brom and it was the first of many strikes. In total Law would score a staggering 237 times for the Old Trafford club.

Law would cap his first season at United with an FA Cup final goal in a 3-1 win at Wembley against Leicester City. However, it would be the 1964/65 season that would go down as one of the most significant and greatest in United history and Denis Law’s career. Not only did the club and the Scot win their first league title since the Munich air disaster, with Law contributing 28 goals in total, but the Old Trafford ‘King’ won an unprecedented Ballon D’Or, calling the moment the ‘pinnacle of my career.’ He was the second British footballer to win the award, Stanley Matthews being the first in 1956, and the only Scottish player to have ever won it to date.

Title and honours aside, ‘goals’ is the word always associated with Denis Law. He had a magnificent touch of the ball and was an exceptional finisher, especially in the air, his heading skills were outstanding, which the Scot claims credit for this must go to Bill Shankly. His former Huddersfield manager would string a ball up to the main stand during training for his players to run, jump, and head. With every successful header, the ball would be inched higher which Law said ‘improved your spring dramatically and was great fun.’ This held ‘The Lawman’ in great stead for headed goals, but in the air or with feet, he was one of the most lethal strikers the footballing world had ever seen. Not only was Denis Law a supreme goal machine, but he was also fantastic at assisting goals and his attitude alone and always giving his all for the team made him an all-round world-class player and an instant Old Trafford idol.

All of the above attributes helped United immensely when it came to clinching the 1966/67 league title, Law’s second championship with the club. On the last day of the season, he scored two goals in a 6-1 win at Upton Park against West Ham to seal top spot in style and ensure he and United were champions again.

Sadly, Law would miss the 1968 European Cup final through a knee injury although he had played an excellent part in helping the team reach the match against Benfica. His ‘trinity’ team mates, George Best and Bobby Charlton, played the match in a way that would have made Law proud and they contributed with goals that won the cup for United and secured a deserved medal for their team mate who was watching the match from his hospital bed.

‘The King’ had not planned to leave Old Trafford but his persistent knee injury and changes in the managerial position at Manchester United saw him given a free transfer as he neared the end of his football career. He went back to the blue side of Manchester, spending one season at Man City, and contrary to many post-match reports, his back-heal goal against United in April 1974 did not relegate his old club. Other results condemned The Red Devils to their fate but the Scot commented that the goal was the ‘most painful memory of my career.’ Either way, it was another little piece of Law-United history and the great man could not be blamed by United fans after the eleven golden, incredible years he gave to the club.

When Denis Law signed for Manchester United he said: ‘I felt I had become part of something special at Old Trafford – and I was right.’ Right he was, it was a special era for the club, and they had a super special player in the wondrous Denis ‘The Legend’ Law. A Manchester United and football legend he certainly is, the first ‘King’ of Old Trafford will always be idolised by Red Devil fans as one of the finest, most sensational strikers the club ever signed.