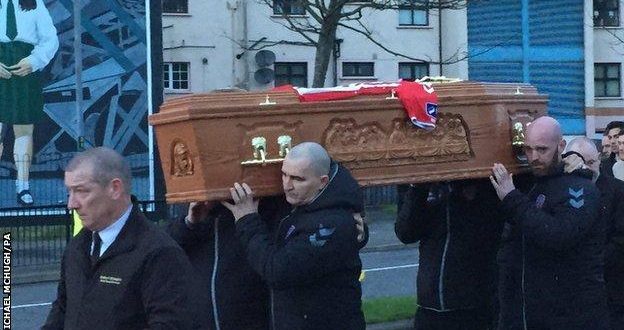 Derry City Football Club; still shattered by the loss of their beloved captain

It has been just over a month since the tragic passing of Derry City’s leader Ryan McBride, yet the club and city are still yet to come to terms with what has transpired. The inspirational Derry man sadly lost his life at the young age of 27, and his beloved side are seemingly yet to fully recover from this heart-breaking situation.

The streets of the city were lined with thousands of mourners as the coffin, draped with his famous number five shirt, passed through the hometown of a man adored by all around him.

The country was sent into shock at the news, which arrived just a day after he led his side to a 4-0 League of Ireland victory over Drogheda. Many come and go at this fantastic club, yet nobody knew better than McBride just how much it meant to wear the red and white stripes.

Countless team-mates, coaches, political figures and an endless list of others expressed both their utter sadness and condolences to the adored McBride, as flags at Football Association Ireland HQ in Dublin flew at half-mast.

Irish President Michael D Higgins was one of a number throughout the country and further afield to express their grief, yet it was Derry City manager Kenny Shiels who released the most poignant of tributes in a heartfelt poem which he read out at the funeral.

Shiels held back his tears while reading out the emotional poem he penned about his late captain, which ended with the tearful utterance: “In your absence we will still play the game, but in your absence, it won’t be the same.”

The club and fans have attempted to move on and remember their cherished captain, but this loyal city will require much more time to fully repair their broken hearts.

Salient facts about the skipper transcend the tragic story into further sorrow, with his loveable personality at the centre of the sadness. McBride was highly regarded by many as ‘Mr. Derry’, while the short walk from his house to the stadium epitomizes just how strong his connection to the club was.

Further revelations convey his determination, leadership and loyalty above all else. Beginning his career with the club in 2011, McBride went on to make over 170 appearances, with more than 50 as captain, yet even more than that as a fans’ favourite.

More poignantly however was his ability to lead; to lead his team-mates, young and old, to their full potential. Strikingly, the average age of the club sits at just under 23 years old, and more importantly it was McBride’s role as both captain and stalwart of the club to guide these young men forward. He did it to perfection. The young stars of the future had an impeccable mentor who will be sorely missed by all, but none more so than this very young squad of athletes.

It is no surprise then that the club have fallen massively since his passing. Derry City played four matches this campaign with McBride as sturdy as ever at the back, winning all four and conceding just three goals. The club have not won since. A further four games have been played since sorrow struck the city, and although the club and fans remain as devoted as ever, Derry City have conceded ten goals in the four losses that have transpired, three league games and a League Cup loss to Galway United.

His untimely death was the latest tragedy to send heartbreak through all of those involved with the club, following the death of former striker Mark Farren and the Buncrana pier tragedy, which claimed the lives of the family of fellow player Josh Daniels.

The extremely sad passing was remembered with marks of respect throughout the globe, with countless football clubs paying their respects with a minute’s applause, while several others opted for a minute’s silence to mark such an unfortunate situation for this truly unique city.

Events like these not only bring the footballing community together, but also remind us life should not be taken for granted. The tragedies that have affected this wonderful club will never be forgotten, and will only bring members of this close-knit community closer together.