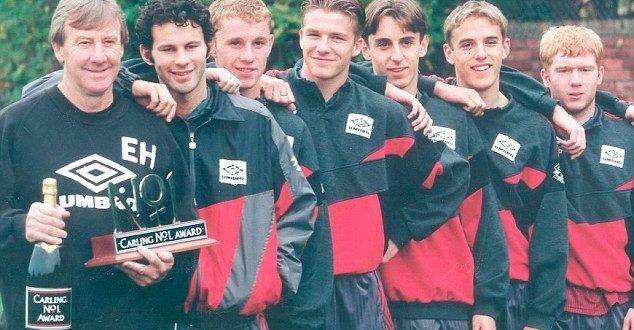 Eric Harrison MBE The Man Behind winning something with kids

Eric Harrison has much to celebrate over the coming months – turning 80 years old and a trip to Buckingham palace to be awarded his MBE. These celebrations follow on from last year’s anniversary of 25 years since he coached a special group of players to a youth cup victory – ‘Fergie’s Fledglings.’ Football and Manchester United owe so much to this man yet some fans may not ever know who he is so here is an insight into the life and times of the man who ‘scared the hell’ out of the likes of David Beckham and Gary Neville but made them ‘good human beings’ and of course, tremendous footballers.

Harrison’s football journey began at his local club Halifax Town in 1957, playing professional football for the Yorkshire side for seven years and making 199 appearances. His professional career was played in the lower leagues with Barrow and Southport amongst others, who enjoyed the services of the wing half. With over 500 games played as a professional footballer, 17 years after his Halifax debut, Eric hung up his boots and moved into coaching – it would be a decision that would put him firmly in the Manchester United history books by playing a hugely significant part in a very special era at the club.

Joining Manchester United in 1981, Ron Atkinson employed Harrison as youth team coach, and although the youth team was in reasonable shape at the time, it wasn’t until Sir Alex Ferguson became manager in 1986 that United’s youth system took off at a tremendous rate, rolling back the years to the Busby days. Having told the new United boss to ‘get me some better material to work with and I will produce more first team players for you,’ Harrison meant business, and Ferguson obliged, taking on 30 new scouts who travelled to every touchline in the country looking for young talent. The rest, as they say, is history, and this great history that Eric Harrison is part of, the special era at the club, is of course, the emergence and rise of Giggs, Scholes, Beckham, Butt and the Neville brothers – AKA The Class of ’92.

Alongside these greats of the game, from Harrison’s youth setup the likes of Chris Casper, Keith Gillespie and John O’Kane were also part of the exceptional youth cup winning team of 1991 and they too went onto make appearances with United and had professional careers in the game with other clubs. Harrison quite brilliantly installed his young crop of players with self-belief, developed their skills to fill their full potential on the playing field, and, he made sure they were disciplined and respectful on and off the pitch.

Alongside completing these successes, Harrison can also boast record crowds at his youth team matches, playing their games at United’s old training ground The Cliff, there was barely a spare place on the side-lines demonstrating just how good a youth team United had.

‘I could not contain my excitement at watching these young stars train and play and I was always speaking to the boss, telling him how good they were.’ These were the words of a proud mentor and coach who couldn’t wait for his ‘kids’ to be given their chance in the first team.

After the then controversial sale of United’s big name stars at the end of the 1994/95 season, Harrison’s young guns were to get their chance to shine at the start of the new term against Aston Villa. The Yorkshireman was scouting on the afternoon his kids kicked-off against the Midlands club, he said his ‘heart sank’ when he heard they had lost 3-1. However, he knew the likes of Beckham and co would come good, and he wasn’t wrong, although Alan Hansen was. Harrison described the former Liverpool player’s famous line ‘you don’t win anything kids’ as a ‘howler’. After the opening day defeat the ‘kids’ went 17 games unbeaten making Hansen eat his words and for Harrison to say ‘win nothing with kids? Depends on the kids doesn’t it?’ As well as jumping the gun, perhaps Hansen also had a short memory. Two seasons previous, still a player himself, the Scotsman actually played as an over-aged player in a reserve match against United on the road to a comeback from an injury. Ironically, that team included many of the youngsters who started the opening day fixture at Villa park, and they beat Hansen and co in that reserve game 6-1. After remembering this match, Eric Harrison completed his mocking words by saying ‘I always thought that the BBC staff researched better than that.’ I am sure Alan Hansen regrets to this day not studying the ability of Harrison’s young men and remembering how good they were in that youth team match before making a snap judgement.

One person’s judgement that was correct was Harrisons. The same season his kids were written-off, they went onto win the Premier League title. All in all, the Yorkshireman’s youngsters, Paul Scholes, Ryan Giggs, Phil Neville, Gary Neville, David Beckham and Nicky Butt went onto win an incredible 121 major club honours in total with United, and it all started with first-rate, tough, no-nonsense training at The Cliff under the guidance of one man, Eric Harrison. Happy forth-coming 80th Birthday to the man who proved you can win something with kids (quite a lot actually!) and congratulations on a much deserved MBE.