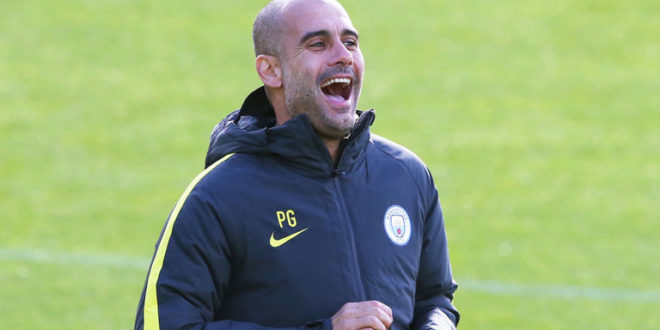 Many football fans in the world were greatly excited to hear that this Catalonian guy is truly coming to England. Curiosity arose if his philosophy that is play, possession, and positioning revealed by Thierry Henry would also work out well here in the toughest league in the world. I believe this might draw public attention the most. 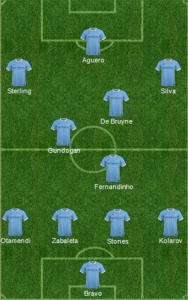 At first, the formation selection of Pep Guardiola has remained inconsistent in general. As he is such an adventurer, the players and their positions are always flexible to change. Assuming that his favourite choice is 4-1-2-3, and there are no injuries, the best 11 to my prediction would be similar to the picture on the right. During the previous matches, Pep allowed Silva to be a free role and needed both him and De Bruyne to become No. 8, which is known more as attacking midfielders looking for the ball behind the opponents, between lines and taking middle shots when possible. The interesting point here is the role of Fernandinho.

One of the biggest feature in Manchester City FC in this season is the change in the full back roles. Build-up play which was not really a strong suit for this team started from this alternation.

As  shown in this picture above, two full backs come into middle and the defensive midfielder goes to centre back so that makes the build-up play happen through concentration and also there is a possibility of triangle positioning. The conductor in this moment is Fernandinho who plays a role of Sergio Busquets in FC Barcelona and Xavi Alonso in FC Bayern Munich. Fan favourite player Toure has been seen as not good enough by this manager, due to the amount of activity and dedicated defence that he lacks.

However, it doesn’t necessarily mean that two full backs are always on the centre. Pep emphasised the ‘Importance of width’ all the time to penetrate the opposite defenders’ line. Therefore, these full backs might also be able to place wider depending on the attacking situation.

Here is the basic system of Pep’s:

He consistently orders the team to build-up play in which the ball is supposed to be started from the goal keeper. That’s the reason he chose Bravo who possesses decent passing skills and also known for his brilliant decision making are something that makes him superb, rather than No.1 GK in England national team. By doing this, the team could keep the ball longer than its opponents. They dominate matches by making opponents run for the ball for a long time without having it at the same time. This causes the opponents to lose energy and concentration, leading them to make mistakes.

(The moment right before Man.City scored with the influence of high pressing against FCB)

Given that Pep’s players are saving up some stamina and opponents are losing it, the effect of high pressure doubled. Former manager of FC Barcelona proved on 1st Nov that unceasing efforts to pressure ended up paying off.

As we all know, this Spaniard is actually into alteration of tactics and one of the famous is to put three-man defence. Recent matches with Southampton FC, Borussia Monchengladbach, and Celtic FC he brought out this fresh tactic, although old for some others. The results were 1-1 respectively. He cannot say those trials worked well, but nevertheless it is worthy enough to see everyone’s individual talent and how effectively they adapt and digest what he ordered in different situations.

In addition, considering what he has done is not totally different from the usual one which is ‘four men in the back’, he is highly likely to keep doing it for a while. Due to the fact that the players are accustomed to ‘Inverted full back’, the version of three-man defence is a progression. In this situation, Fernandinho also has a big part to being a bridge between defenders and attackers.

In the recent match on the last weekend against Chelsea FC, Pep responded to Conte’s unbeatable Three-man defence by choosing a Three-man defence as well. As shown in the pictures above, Fernandinho was given the task of not just distributing the ball to the team mates when the team took the ball back. He rather plays backward and places as one of centre backs so that two other defenders have a wider position to use the pitch efficiently. Presumably Pep wanted Sane and Navas to keep annoying Chelsea’s wing backs diligently by holding a numerical advantage that resulted from the defenders’ widening.

The outcome was disappointing, but the results is dependent upon small moments particularly in football. Some experts said Manchester City was unlucky because it would have been going totally different aspect if they were leading 2-0 for De Bruyne’s goal. Also, this team was not fairly outplayed and they brought the ball possession rate which is 61% until 90 minutes. However, Chelsea had good finishers and they took the game after all. 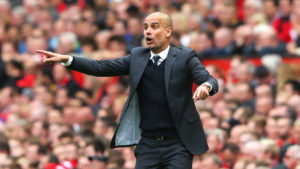 As a huge fan of his philosophy that is full of colour, they played their own way even with the disappointing outcome. Fortunately, he always showed us the team is moving on to better things. He has been in Manchester just for less than 4 months. It is too early to make a hasty conclusion to his success in England. At least, his tactics have delighted our eyes and we can tell this team is evolving now. 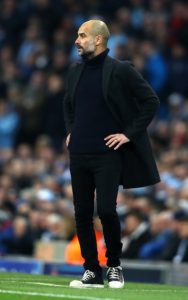