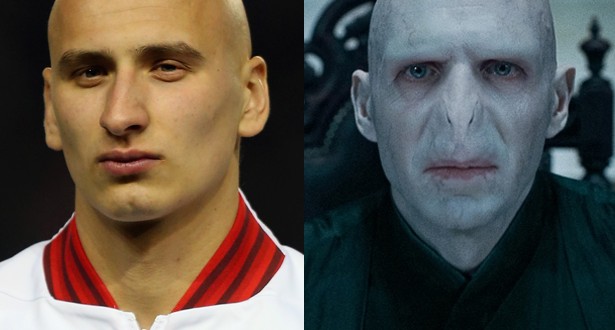 Jonjo Shelvey and Lord Voldemort from the Harry Potter franchise enjoy a tender moment together.

A bit overused, but nonetheless hilarious, is the striking resemblance between Swansea City’s Jonjo Shelvey and Lord Voldemort of the Harry Potter series. I mean just look at the 2 of them, the resemblances are absolutely striking: The shaved cranium, The deathly stare, The non-existent nose, its all there. Many a fan group in England has taken notice of this as well and serenaded Shelvey with some cracking chants about this, the pick of the bunch coming from West Ham fans while Shelvey was still at Liverpool. The best part of it all is that Shelvey was a West Ham fan growing up and took all the chants in stride, a sampling of them is below.