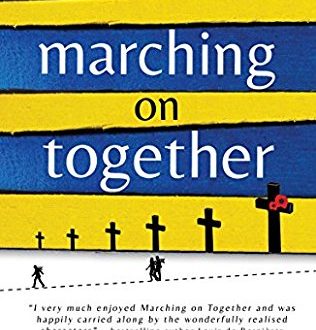 FootyBlog reviews: Marching On Together

Its July 2014, a slumped pale Paul Collins otherwise known as Johnny has just been released from Wakefield Prison and is greeted by his brother and friends. The first thing he asks, after complaining about leg room? The state of his beloved Leeds United. Things had changed since he had been in prison, new ownership had really shaken up the club he loved and things were on a downhill spiral. The day after release was the start of an adventure for this group of friends. A trip to Belgium, exactly what they all needed but were they prepared for what was coming, realisation of their past and present predicaments hitting them all at once.

Marching On Together is more than just a novel based on Leeds United fans. The self-proclaimed title suggests a book that is based solely on football and the urge for Leeds to succeed or maybe the failures of Leeds to succeed. Yes, the characters are all fans of the club but the true meaning and following of the story bonds you with their personality and the struggles they all face while making the short get away. Each single character has their own struggle and none are strikingly similar and as the book continues this becomes a theme at the forefront of the friends accepting whatever it is they are left to dealt with from their lives.

From start to finish the book is carried along by each character in a point of view conversational tone, this allows you to picture yourself in the group yourself experiencing each turn and twist. Alongside this is an objective narrator in the author PJ Whiteley, in-between quotations sharing the mood, feelings and tone of all characters supporting the main storyline. The reliability of this is second to none, Whiteley being a Leeds fan sets his facts and really adds to tension of the story chapter by chapter.

Each character has a different story along the way, the brothers Allan and Johnny Collins, contrasting figures. Allan with his own business, family and success compared to Johnny a released convict with what seems like nothing, can he find a job or more important to himself can he find love again. Allan slowly becomes a fiery temperament in the group which threatens a breakdown but guided by his wife, Jenny can frailties be mended. Yvonne, is kept going by her secrets and all together becomes weakened because of this, but does her future hold her back? And what happens when it all comes spilling out to the group. Petra and Craig are both intrigued to learn more but put together couldn’t be more opposites, quiet, mysterious and smart can Petra finally become one of the group instead of just someone from work and Craig, plays in the band but not the smartest, what will this trip hold for him.

Overall, PJ Whiteley keeps the story intriguing from start to finish and with the style of writing, humorous but warm keeps you attached to the group and involves you in their journey in Belgium wanting to know to secrets and the outcomes. As a book titled as Marching on Together, many would believe that Leeds fans would be the primary target audience but they couldn’t be more wrong. The story is so much more than just the football, that is the just the beginning of the tale. That is what links the characters together but each have their own story to tell and the attachment you feel after reading is what the book is all about, the twists and the turns and the unexpected truths revealed down the line.

Marching On Together by PJ Whiteley is available on Amazon now.

Tags marching on together pj whiteley