Home » Video » The 5 funniest own goals ever scored 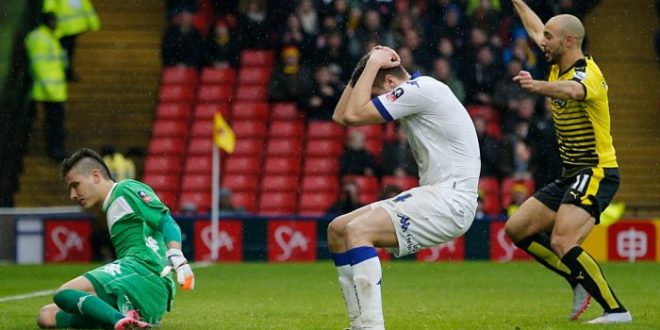 The 5 funniest own goals ever scored

Today we’ll get you trough the funniest own goals ever scored.

We all love goals, the goal is the reason of football, a goal is that moment of joy where you think you couldn’t be happier, the tool that every legend of the sport used to be remembered.

Think about the own goals for a second. They are the exact opposite, if it happens to your team it brings you this awful sensation of disgrace that can totally ruin your day, imagine then how the players should feel when it happens to them.

But sometimes, just sometimes, own goals are the reason of uncontainable laughs and joy, we are talking about own goals that are so dumb that you can avoid laughing, even if it happens to your team; sure you’ll laugh later, there’s a moment for everything in this life.

Before starting with the list, we would like to share an interesting fact with you: The first own goal ever registered was scored by Gershom Cox of Aston Villa against Wolverhampton Wanderers on 1888. Since then, tons of own goals have been scored in all kinds of leagues of the world. Unfortunately, we don’t have any videos of those vintage own goals; but, for this special occasion we collected the funniest own goals among the internet, we were selective and picked just 5, the list is short on quantity, but check the quality of these beauties. You might think these goals were scored on purpose.

Vincent Kompany is a Belgian central defender known for his strength and leadership in the field, he has been a key part of the Manchester City’s success over the past couple of years, and the captain of the citizen ship is going to be remembered for all the supporters as one of the best defenders of their team history. But I don’t think that the supporters could ever forget this disastrous slip neither. It happened against Fulham on 2013, Manchester City was leading the score 2-1. But in the 70th minute Fulham’s Sascha Riether sent a cross trying to find some partner in the rival box, that’s exactly what happened, Kompany became the best Fulham’s player when he tried to clear the ball only to score in his own net.

Recommended for you: Top 10 Richest Footballers in 2016

Dutch football is the cradle of so many talented footballers from all parts of the world that end up playing in big teams. Luis Suarez, Ruud Van Nistelroy, Christian Eriksen, to name a few. Van der Hoorn did not follow the same steps as the footballers named above. This horrible mistake happened against AZ Alkmaar on 2013. Apparently Van der Hoorn thought that AZ Alkmaar made sufficient merit to score and he just couldn’t spoil that effort, so he scored an on goal.

However, it seems like Van der Hoorn has improved his clearing the ball skills, because Ajax signed him that same year and he is a regular player on the team.

Little did we knew about Tahiti’s football, so we decided to investigate to write about this own goal. Tahiti has a football league called ‘Tahiti Football Ligue 1’, the competition format is divided into regular seasons and play offs, this league has only 10 teams which is no surprise; Tahiti’s population is approximately 183,000 people. So there are not so many places to scout for new talents. One of the teams of Tahiti Football Ligue 1 is AS Tefana. His goalkeeper has scoring abilities too, watch this incredible own goal he made. Matt Roche wrote the Tahiti’s name on the football map, but maybe not in the way he would wanted to.

Recommended for you: Nike Presents The Switch – Featuring Cristiano Ronaldo and others

This incredibly funny own goal came after an incredible save made by Al Faisaly’s Goalkeeper Mohammad Shatnawi. We’ve seen lots of awesome bicycle kick goals along the years, but never a bicycle kick OWN goal. Shatnawi came to this world to show us that everything is possible in this life. It’s obvious that the guy has good skills at goalkeeping – and scoring. What the hell was Mohammad thinking when he did this? It went from a heroic save to a catastrophic move in less than a second.

This goal had to be first of the top of this list; it is the cherry of the pie. Chris Brass had a long career; he played 394 professional games from 1993 to 2009. During his 16 years as professional player, Brass played for 8 different teams. But there was a team, Bury, that wished Brass would not played for them against Darlington on January 17 of 2006. On that game, Brass attempted to clear the ball over his head, unfortunately, the ball was directed to his face, breaking his nose and then rebounding to the net of his own team. If you think that scoring an own goal is painful imagine breaking your nose in the same move.

Chris Brass is currently working as Head Operations for Bury since June of 2015.

We wanted to give you a special bonus for being such a good lector.

We introduce you to Festus Baise, a Nigerian Central Defender that plays for Guizhou Zhicheng capable of making the most amazing acrobatic own goals ever. On December 16 of 2011, Baise scored a scorpion own goal against Sun Hei SC in the Hong Kong First Division. This goal was the big deal back in the day thanks to the internet. If you haven’t seen it, check it out, is stunning.

I hope you enjoyed this list of the top 5 funniest own goals ever the selected what we thought were the best of the internet. If you think that there’s some great own goal missing, don’t doubt to share it whit us in our comment section. Goodbye, see you soon!