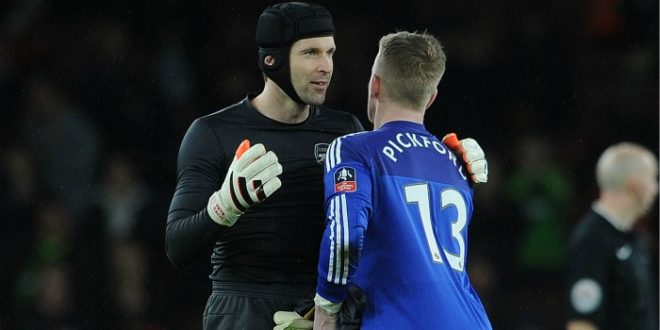 Great Goalies up for Grabs?

Building a successful football team starts at the back. A reliable, super shot stopping composed goalkeeper is what every side needs if they are going to challenge for trophies or make significant progress in European competitions. Goals might win you games, but a great goalie can ultimately save you points in matches with a last gasp save or a calming claim of the ball, and in the modern game there are many more strings to a goalie’s bow. Long, accurate goal kicks, precise throw-outs from the back, saves with feet as well as hands, goalkeepers nowadays are almost expected to play a sweeper role as well as their own position between the sticks, and there are some goalies that are exceptional at all of the above.

Many of these great modern day ‘keepers could be potential transfer targets for teams looking to buy a player in one of the most important positions in the team, but which clubs are in desperate need to fill that number one spot? Great goalkeepers are not always available and can be hard to come by but there are a few magnificent men between the sticks that could possibly be up for grabs in the summer transfer window, it is just a question of who and which club gets the best deal.

Sunderland’s Jordan Pickford must be on the radar of top sides during the transfer window. With the Wearside club in disarray following relegation and the departure of their manager David Moyes, the only highlight of their disastrous season, Pickford, must be tempted by a move. Despite his team dropping out of the Premier League, this former Sunderland youth team player has pulled off some great saves this season. At only 23 years old and with a bright future ahead of him, this England under 21 international was short-listed for the PFA Young Player of the Year award – can struggling Sunderland afford not to take the £30 million they are reportedly asking for Pickford if a top club puts in an offer? They would surely love to keep their star man but The Black Cats need the cash and this great goalkeeper could well be in demand.

Leicester’s Kasper Schmeichel is another goalkeeper clubs will be keeping tabs on this summer. Outstanding during The Foxes 2015/16 Premier League winning season, Schmeichel could have asked for a move away from The King Power stadium to a bigger club then, but chose to stay loyal to the title winners. He was their main highlight in the team’s failed attempt at their title defence this season. Finishing twelfth, it was not a good nine months but Schmeichel won the club’s players’ player and player of the year award and has gone from strength to strength between the sticks making him one of the top ‘keepers in England if not in Europe. Of course, he was always destined to make it to the top being the son of former Manchester United great Peter Schmeichel, but will he fulfil that ambition with a big money move away from The Foxes? It would seem it is now or never for the Dane, he is in his prime and top clubs don’t come knocking every day, time to turn the rumours into reality?

A safe pair of hands and a top shot stopper to match is Joe Hart. This man between the sticks could be a real coup for any club looking for a reliable and experienced ‘keeper. Having been frozen out at his current club Manchester City since the arrival of manager Pep Guardiola, Hart has spent this season on loan at Italian club Tornio and despite admitting he has enjoyed his time in Italy, the ll Toro side have concluded they do not have the funds available to make the England international’s move permanent, leaving Hart in limbo. A goalkeeper of his calibre cannot resign himself to a number two or even a third choice ‘keeper at City, and if he wants to retain England’s number one shirt then he has to play first team football. He will move this summer but to which club? To a rival Premier League side or another European team? Either way it will be significant for Joe Hart and the team he joins.

Another major goal keeper move this summer could be Manchester United’s David de Gea. The Red Devil’s number one is constantly linked with a big money move to Real Madrid and this transfer window is no different, will de Gea return home to Spain? Undoubtedly one of the best goalkeepers in the world, United will want to keep hold of the Spaniard but the draw of going back to his native Madrid with Real, after the same deal collapsed two years ago, could be too hard to turn down. However, he is loved by the Old Trafford faithful and now United have Champion’s League football next season de Gea could decide to stay with the club he has become a world-class ‘keeper with. Manchester United will certainly hope their number one stays, but if he doesn’t, perhaps a move for a certain Danish goalkeeper’s son could be on the cards…

The strangest goalkeeper scenario must be at Arsenal. All three of their goalie’s futures are uncertain despite Arsene Wenger buying Petr Cech in 2015 as a resolution to their struggle to find a top man between the sticks. Cech has lived up to every inch of that resolution, however the Arsenal manager has insisted on playing his number two David Ospina in the Champion’s League and various cup games since Cech’s move leaving the Czech Republic international on the bench – the very reason why he left Chelsea. So, after two years of being in and out of the first eleven, will Cech want to find permanent first team football elsewhere? Ospina has also been linked with a move to Fenerbahce, perhaps both ‘keepers are as frustrated as each other with the goalie situation at The Emirates? With forgotten man Wojciech Szczesny having been on loan at Roma for two years, Wenger, if he stays at Arsenal, has a bit of work to do in finding a settled solution to his number one goalkeeper issues, either way if Cech wants to move, it will be The Gunner’s loss and another club’s gain.

So, while Arsenal may be on the lookout for a new ‘keeper, judging by the speculation and how the season has progressed, three other big clubs in the Premier League could be in the same position as The Gunners. As already discussed Man United are one of those teams, but what about Liverpool and Man City? The Merseyside club haven’t had a world class goalie for many years, and if they want to compete for the Premier League title and do well in the Champion’s League then a big money buy in this position has to be a priority for Klopp this summer – will any of the goalkeepers mentioned make the move to Anfield? For Jordon Pickford or Kasper Schmeichel this would very attractive, especially with European football on offer, but could they make the step up to a top club? The same applies to Manchester City. Having spent £17 million on Claudio Bravo last year, it seemed Pep Guardiola had ‘got his man’ however, the Chilean hasn’t lived up to expectations, questioning whether City will delve into the transfer market again for a top ‘keeper or keep faith with Bravo, one certainty is that Joe Hart is not part of Guardiola’s plans.

The goalkeeping position has never been so significant in the modern game. The necessity to have a top shot stopper is critical for top sides, especially when you consider the modern day ‘keeper perfects distribution, starts attacks, and most importantly can pull off last ditch saves with any part of their anatomy. All of these skills could possibly save or win his team decisive points, making a big difference come the end of the season. On this basis, several clubs will be looking for a class goalkeeper to add to their summer signing list.

It remains to be seen if the Premier League’s top shot stoppers make a big money move to a rival English club, transfer to a European side or stay with their current team this summer, but there is potentially some great goalkeepers up for grabs that could make the difference in a bid for success in the 2017/18 season.