Home » News » Griezmann Has a Tournament to Remember 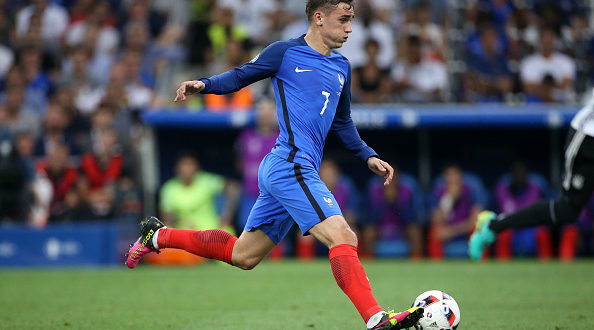 MARSEILLE, FRANCE - JULY 7: Antoine Griezmann of France in action during the UEFA Euro 2016 semi-final match between Germany and France at Stade Velodrome on July 7, 2016 in Marseille, France. (Photo by Jean Catuffe/Getty Images)

Griezmann Has a Tournament to Remember

Antonie Griezmann was probably not many people’s first choice when guessing who would be the top scorer in Euro 2016. So far, the Frenchman has outpaced everyone else in the competition by scoring six goals through the semifinals.

One of the obvious reasons for his goal scoring has been his finishing ability. He has been clinical at the most opportune times. In Thursday’s semifinal his two goals were the difference against the World Champions of Germany. Not only was his finishing impressive, but his pace also proved to be too much at times for the Germans to deal with.

Goal scoring is nothing new to the Frenchman. In La Liga this past season he netted 22 goals in 36 matches for Athletico Madrid. Including seven goals in the Champions League.

The one blemish on his season was the missed penalty in the Champions League final. He took a lot of criticism for the miss and entered the Euro’s on a negative note. However, judging by his play that memory is well behind him.

With Sunday’s final approaching, he will be called on once again to produce the highest of quality for his side. Portugal are a veteran defense that has many world class defenders like Pepe. Griezmann will no doubt be tested, but his pace could prove to be too much for the Portuguese defense. If they can’t deal with him they may find themselves in trouble.

This final is a golden opportunity for the 25-year-old to redeem himself after the Champions League final, and if he comes up with a deceive goal in the Euro final he will most certainly be a French hero.