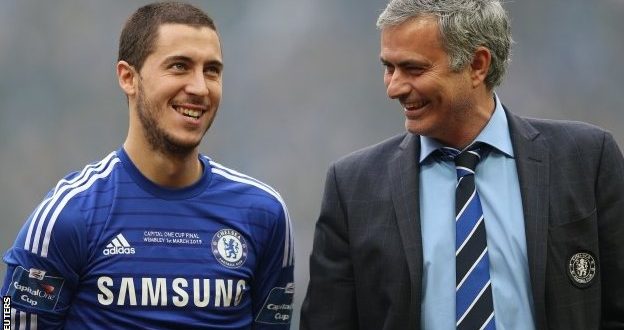 It was revealed on Friday that the former Chelsea manager Jose Mourinho was confirmed as United new manager, agreeing to a three-year contract.

While on Thursday, some newspaper reports suggested that Hazard had spoken to his former boss to discuss a potential move to Old Trafford, wanting a Stamford bridge exit.

Ahead of the pre-Euro 2016 friendly against Switzerland at the weekend from the Belgium training camp, the 25-year-old suggested a transfer was not part of his plan.

He told SSHQ’s Gary Cotterill “Mourinho is a fantastic manager. I wish him good luck for the next season.

“I can’t wait and just want to play against Manchester United. He’s a good manager with a lot of experience. He’s at a big club now and he will just want to win games”

On the subject of his future at Chelsea, he added “I’m happy. I’m always happy. I have spoken to [new boss] Antonio Conte.

“He said good luck at the Euros and we will see after the championships.”

Hazard who signed for Chelsea four years ago from Lille for £32m had a disappointing season by his standards.

However this summer, the Belgian midfielder is eager to display his skills on the European stage in France following the glimpses of his old form in the latter stages of the Premier League campaign.

When questioned if he was back to his best, he said “I hope so. I want to be one of the best players at Euro 2016 and I hope we can get to the semi-finals or the final with the team. We have a lot of quality.”