Home » News » Henry Goes From Hero To Villain, Then Apologises To Fan 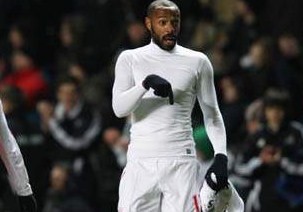 Henry Goes From Hero To Villain, Then Apologises To Fan

Thierry Henry went from hero to villain in just a matter of days when, following his amazing match winner against Leeds in the FA Cup, he remonstrated with an Arsenal fan to come onto the pitch after the game to have a word with the Frenchman.

Arsenal lost the match 3-2 with Swansea playing some excellent passing football, much in the same style as Arsenal, but won the game following a loose pass from Henry. At the end of the game when the Arsenal players were applauding the crowd, Henry became incensed with the insults from one particular fan and gestured as if he wanted the fan to come down and say it to his face. Henry has since issued an apology for his actions, but clearly felt strongly about the fan, believing that he should support the team instead of hurling abuse at them – a fair point.