Home » News » How Franck Ribery got his scars 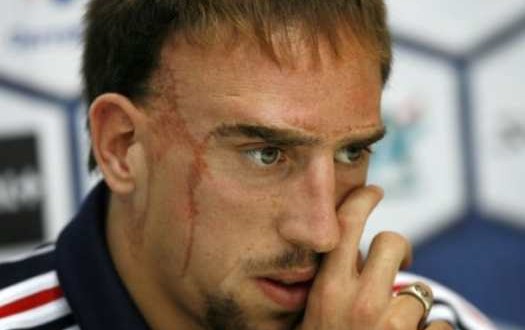 How Franck Ribery got his scars

Pound-for-pound Franck Ribery is easily one of the best players in the world. Still plying his trade in the Bundesliga with Bayern Munich, the 29 year old has played for a total of 7 clubs in his career. After starting off with Boulogne he moved on to Ales, then Stade Brestois, then Metz, before making the curious transfer to Turkish giants Galatasary. He played just 14 times here before moving back to France to join Marseille where he stayed for 2 years – the longest spell he’d had at any club before. He’s now been at Munich for 5 years, and at the age of 29 you wonder whether he has one last, big money move left in him. Personally I’d love to see him running down the touchline at Manchester United’s Old Trafford, or perhaps Real Madrid’s Bernabeu where he could follow in the footsteps of another legendary French footballer, Zinedine Zidane.

Ribery’s life hasn’t been without controversy, with a difficult upbringing in Boulogne-sur-Mer, on the outskirts of Boulogne. It was here that Ribery was involved in a car accident that left him with the distinguishable scars across his face. Franck, aged just 2, was travelling with his family when his car collided with a truck, with near fatal consequences. Franck Ribery needed more than 100 stitches to his face, and is left with 2 obvious scars running down his face. 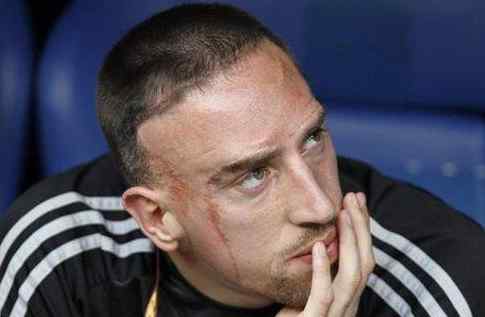 Thankfully the brilliant footballer will undoubtedly be remembered for his tricky footballing style, running at pace at defenders with the ball apparently glued to his boots. Ribery has left many-a-defender on their backside, going on to set-up and score some unbelievable goals. The only thing that remains for Franck is to pick up as much silverware as possible, which definitely merits his talents. He’s been unfortunate to be involved in a French international setup which seems to lack any sort of decent management. With the players at their disposal they should be challenging for more honours. Meanwhile with Bayern Munich he’s been just as unlucky, with the German’s unfortunate to miss out on success in Europe on several occasions. Surely there time will come soon, with the Bundesliga growing stronger-and-stronger as time passes.

Perhaps Ribery’s immense talents and never-give-up personality could have been a result of the tragic car accident some 27 years ago? When asked about it, during his Marseille days, Ribery responded “It is not true that I went straight through the car windscreen but the smash did me enough damage anyway…The strange thing is the accident wasn’t even that serious. No one died. You might even say that I was lucky, but the problem was that I was sitting in the back and I went flying forward on impact. I was too young to count the stitches they put in my face but I think it came to hundreds.” Thoughtfully, cleverly and strongly Ribery concluded “So here I am. This is my face, it is the one people know me by. I am happy with my face. Why shouldn’t I be happy?”

Who can argue with that, whilst Ribery goes on to demonstrate his illustrious talents at the Allianz Arena, people should focus on what goes on on the football pitch, not what has become part of the gossipy, soap-opera side of the game.