Home » News » The inherent ritualism of a local derby

The inherent ritualism of a local derby 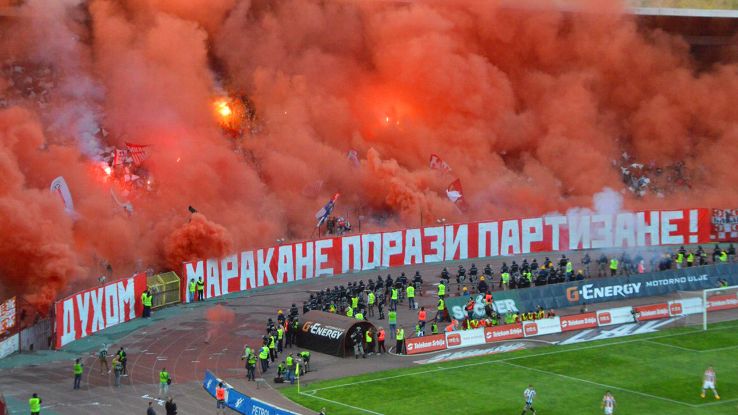 Attending football matches can be seen as overtly ritualistic for die-hard supporters. There are pre-game rituals, everything from a pub you visit before every home game to an organised march flowing towards the ground as a sea of passion and colour, both inspiring fellow fans and intimidating opposition.

During a match these ritualised behaviours come to an ultimate fruition, fans exhibit a choreography of movement, of hand waving and jumping, chanting and singing, tifo and designs that can be as complex as the tactical battles unfurling before them.

Following a win they might chant certain players names, the name of the coach, or even have a ritual involving their team, as do Western Sydney and their ground-swelling post game celebrations.

Following a loss they may all leave early and console each other, as a sign of disappointment, or may leak out one by one and travel home alone, the ultimate sign of accord broken, disappointment reigning supreme.

Regardless of the ceremonial consistency of their behaviour, from a distance and seen by a perhaps sceptical viewer, the passion and involvement is a form of modern day tribalism, a yearning for fraternity whilst simultaneously dividing yourself from the other.

This can be seen as especially evident in local derbies, whereby there is often so little tangibly separating fans from either side that any hint of historical difference; socio-economic, racial or religious background, even political beliefs or any other once meaningful point of difference can be wildly overstated as to further the passion and excitement that fans can extrapolate from such an eventually often meaningless occasion.

This might seem a largely foreign concept for most Australian and American readers who may have little immediate experience of ancient tensions to draw on in their respective sporting arenas.

Conversely, in much of Europe, footballs traditional stronghold, these historical or contemporary disparities can be much more evident or easily exaggerated. In Glasgow, for instance, much violence and animosity has been perpetrated under the ‘old firm’ guise of religious fandom.

Across parts of eastern Europe past political stigma’s are persistently re-enacted through ‘pivotal’ local derbies.

Ultimately the ritualistic hate and disunion sometimes evident in these games in particular often lead to nothing but a cathartic release of stress, passion and anxiety for these fans in a productive and healthy manner. In rare cases, however, they can lead to a continuity of deep seated and historical divisions that possibly should have been forgotten years ago.

England tends to escape the best and worst of the passionate local derby. While the history of the Tyne-wear or Merseyside derbies are there for all fans to see, crackdowns on behaviour and violence coupled with a typically British lack of fervour for tifo and choreography arguably reduce both the atmosphere and the animosity. While there is no Superclassico in England and never will be, there are still the remnant evocations of division in English football that there are across almost all of Europe

In all cases inevitably the question is, are these occasions a stark and unfruitful way of perpetuating often-meaningless disunity, that can lead to the continuation of antiquated hate and prejudice?

Are they mere evocations burgeoned by a human instinct for loyalty, patriotism and group mentality that allow an otherwise repressed longing for difference to materialize a healthy, colourful and loud consequence?

Are the differences overstated, or are the reactions to these differences, the modern day segmentation of tribes, being inflated and over reported by an overly zealous media that would readily investigate and report any perception of violence or intolerance?

The only certainty I can imagine is that the answer would be very different in Sydney than in Belgrade.