Home » News » Did John Terry have the send off he deserved? 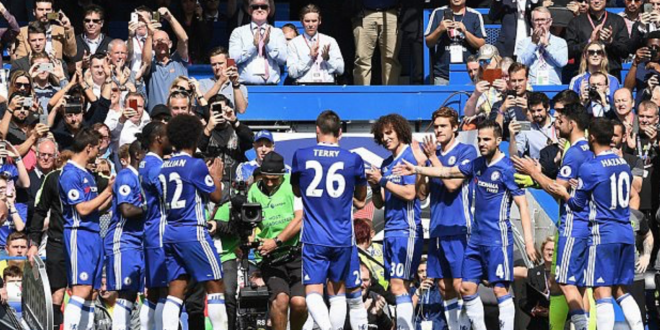 Did John Terry have the send off he deserved?

The last game of the English Premier League season took place this Sunday with lots of celebrations for some teams and lots of disappointments for other. For John Terry, it was an emotional one. After 22 outstanding years at his beloved team Chelsea Football Club, he is leaving.

There is lots of talks about how Terry left the pitch at Stamford Bridge this Sunday against Sunderland. On the 26th minute of the match, Terry was substituted for Gary Cahill and received a guard of honor from the rest of the Chelsea team. This was a huge occasion for anyone who supports Chelsea, Terry has played a massive part on and off the pitch for the club during his time there.

So, after the game, ex-football pro Alan Shearer, mentioned on BBC Match of the Day that he shouldn’t have done it. He said for Sunderland to kick the ball out for it to happen on the 26th minute is not acceptable, it would’ve been more acceptable to happen at the end of the game.

Let’s get some facts straight first. Chelsea had been crowned the Premier League champions already, Sunderland were already relegated. So why was this such a big deal?

It took very little time and didn’t affect the flow of the game. Not only was this in dispute with several ex-pros after the game, there followed talk of irregular betting to do with the occasion. There’s always something against Terry.

When Steven Gerrard left Liverpool, it was everywhere. Sky Sports News, BBC, all the newspapers. Liverpool hadn’t even won the league and Liverpool’s final game of the season was live on TV because of Gerrard’s final game. The game was even being advertised as Gerrard’s last match at Liverpool. Chelsea are Premier League champions with a player like Terry playing his last ever league game, and the game wasn’t live. Did Terry deserve more?

He is Chelsea’s most successful captain. Winning five Premier League titles, four FA Cups, three League Cups, one UEFA Europa League title and one UEFA Champions League title. Since the game on Sunday, the only news being reported on Terry is whether it was right or wrong to leave the pitch when he did. Considering he’s won five Premier League titles more than Gerrard, some people would argue that he deserved more. It’s not just about his role at Chelsea. He also played a big role for England. He gained 78 caps for England and was the captain for most of those games.

Terry has one more match left to play for Chelsea Football Club against Arsenal this weekend at Wembley for the FA Cup final.