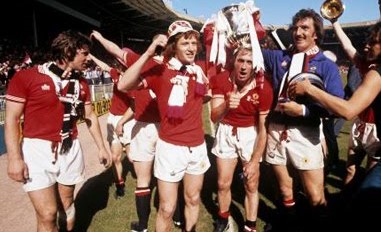 The rivalry was as evident as ever in the ‘70’s but their football status was very different. Liverpool were immense, the team to beat at the time and winning every trophy in the game, while Manchester United had struggled since Matt Busby had left the club. Relegation and failed managers, it was a fry cry from the glory days of the Busby Babes. However, as all fans and players alike will know, bitter conflict between rival teams never dies. Whatever the circumstances, wherever the clubs are in the league, a chance to beat ‘the enemy’ is paramount and the 1977 FA Cup Final was no different. A lot has happened in the history of both United and Liverpool in the 40 years since, but this Jubilee Wembley meeting will always be remembered as one of the best and most satisfying FA Cup victories for The Red Devils.

It is 40 years since this classic FA Cup Final took place, United were looking to win their first trophy of the ‘70’s while Liverpool had already lifted seven cups during this decade. Having won the 1976/77 title before their trip to Wembley, an unprecedented treble was on the cards for the Merseyside club with the European cup to follow the FA Cup four days later. Manchester United were determined to stop their Scouse rivals from creating that piece of history, but being the underdogs and given Liverpool’s incredible form, it was going to take something special to stop the Merseyside team.

Given United’s success under Matt Busby, it was extraordinary to see this great club faltering during this period. Having been relegated to the Second Division at the end of the 1973/74 season, Tommy Docherty’s side did manage to bounce straight back up to the First Division the following season and made it to the 1976 FA Cup final, where The Red Devils were expected to beat Southampton. But it wasn’t to be and United lost 1-0, bringing disappointment to a difficult time for the Old Trafford club. Twelve months later, a final win against their bitter rivals and the bonus of halting their pursuit of three trophies in one season, was the perfect tonic to boost the spirit and determination of Tommy Docherty’s men as they prepared for the game.

Nearly 100,000 fans crammed into Wembley stadium for the Jubilee FA Cup final, 1977 also being Queen Elizabeth’s 25th anniversary of Her Majesties appointment to the throne of the United Kingdom and Commonwealth realms. Referee Bob Matthewson blew the whistle at the traditional kick-off time of 3pm and battle commenced. However, if Liverpool thought they were in for an easy afternoon they were mistaken. United were confident in possession and full of running. They were not favourites of course, but their semi-final defeat of Leeds United had given them belief and The Red Devils were excellent at wining the ball back. They had tasted victory by lifting the Second Division trophy, now they wanted that winning feeling again by bringing home the FA Cup.

On 51 minutes, United made the break through. Taking a shock lead, Stuart Pearson scored with a brilliantly taken goal. He controlled a flick on with his head before unleashing a low hard shot past Ray Clemence. 0-1 Manchester United. However, United had barely celebrated the strike before Jimmy Case brought Liverpool level. Two minutes after Pearson’s goal, Case turned and shot a great strike on the edge of the penalty area, 1-1.

It was a crazy five minutes of the game, in which United went back in front in bizarre circumstances to the ecstasy of the players, fans and The Red Devil’s dugout. 55 minutes were on the clock when Lou Macari’s shot hit Jimmy Greenhoff in the chest and the ball rebounded into the back of the net. 1-2 Manchester United. That strike would go down as one of the strangest yet most significant deflected goals in the history of the Old Trafford club.

Greenhoff’s goal would prove to be the winner in the 1977 FA Cup Final. When the midfield player had signed for Tommy Docherty’s team the previous year, he had told his new manager ‘I’ll get you back to Wembley’ but he had done much more than that, he had grabbed the decisive goal, albeit with a deflection, but no one in the red of United cared. It was a goal and the winner, that was all that mattered. Manchester United lifted the 1977 FA Cup and had stopped their bitter rivals from creating a piece of history that The Red Devils would incredibly achieve 22 years later – a unique treble.

The 1970’s was Manchester United’s least successful era and at times a difficult period for the club. However, whenever that decade is mentioned in the history of United, one proud and momentous day stands out – the 1977 FA Cup Final win – the club’s first trophy since the Busby era and defeat of their Merseyside enemy.

As we look forward to the 2017 FA Cup Final, 40 years ago it was the Reds of Manchester that revelled in Jubilee FA Cup glory, a famous day in football, FA Cup and Manchester United history.