Home » News » Kroenke: Wenger will decide when it is time to leave 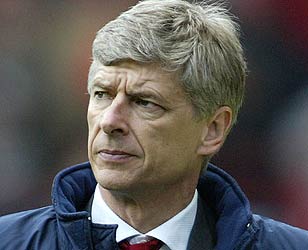 Kroenke: Wenger will decide when it is time to leave

Arsenal owner Stan Kroenke has insisted Gunners boss Arsene Wenger will not be sacked from his post, saying the Frenchman will decide when it is time to go.

Wenger has come under pressure in recent months after ending last season trophy-less for the 6th time in a row, while the loss of key players Cesc Fabregas and Samir Nasri over the summer have contributed to a poor start to the new campaign which included a humiliating 8-2 defeat at the hands of Manchester United.

“It’s his decision and only he will know that, Arsene’s our man. As an owner, that’s who we put our confidence in.” the American said in an interview with the Telegraph.

The 61-year-old also came in for criticism during the summer transfer window, leaving it till late to bring in the likes of Mikel Arteta, Yossi Benayoun and Per Mertesacker to replace the Barcelona-bound Fabregas and Nasri, who joined former Gunner Gael Clichy at Manchester City.

Arsenal have responded to criticism well of late winning three games in a row, and Kroenke believes that the club still have a bright future under the guidance of Wenger, pointing to his excellent reputation for developing young talent such as Jack Wilshere and Alex Oxlade-Chamberlain.

“Maybe it is one of those times when we have to work our way through, maybe with some young players,” he commented.

“Arsene has been really good at developing these guys, people like Jack Wilshere. There are some really good players that Arsene thinks can be special.”

Arsenal currently sit in 13th in the Premier League having picked up just seven points from their first six games of the new season, and come up against North London rivals Tottenham on Sunday.

Having lost key players such as Fabregas and Nasri over the summer, Kroenke believes Wenger still has what it takes to rebuild and help move Arsenal back into contention for trophies once more.

“He still maintains himself in tremendous physical shape. You have to have stamina and energy.”

“[The departure of Fabregas] was between Arsene and him. I like the kid but I’m not going to change his mind. Arsene made the decision.”

“I also understand the decision on Nasri. If we didn’t do something on Nasri, people would be looking at us next summer and saying, ‘Why didn’t you do this?”