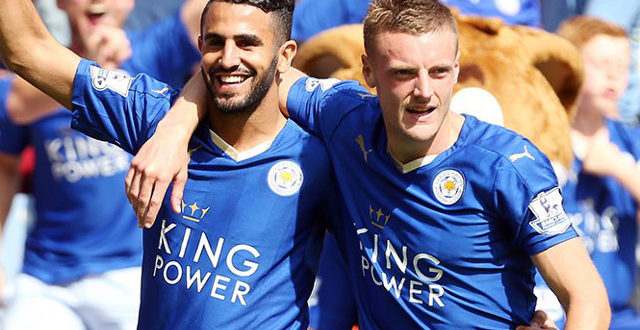 Following Leicester City’s controversial draw at the weekend against West Ham we’ve decided to take a look at the rest of the Premier League fixtures facing Claudio Ranieri’s men and their potential (and still shocking) Premier League win.

Although the point gained against the Hammers was a slight setback to the Foxes, it may have still felt like a win following the nature of the equaliser – a controversial 95th minute penalty. Jamie Vardy was also sent off in the game for a 2nd yellow card after appearing to try and trick the referee into awarding a penalty.

Vardy was also involved in the goal – putting the finishing touches to a fast and flowing counter-attack, started off with Kasper Schmeichel’s huge throw to set the attack in motion. Mahrez and Kante also played a part in the goal, before Vardy converted with a clinical finish. This was Leicester City at their fast-flowing best, playing their own style of premier fantasy football.

Swansea City find themselves sitting in 15th place in the league and are 10 points clear from the relegation zone – so they should be safe failing an almighty-run of bad form. For Leicester they might be without Vardy so will likely have Okazaki as a lone front man.

Away vs Man United (May 1st)

One of their toughest games, despite the kind of inconsistent form Man United have been in this season. This will be a real big test for the Foxes, especially with United looking to push for a top four finish vs the likes of Arsenal, Man City and Liverpool.

Home vs Everton (May 7th)

This should be a relatively straight forward match and easy 3 points (if that ever exists in the Premier League). Martinez’s men have been poor of late, and with players speaking out against their performances they’ve looked a team much out of sorts. Everton find themselves safe in 11th position in the league, with little-to-nothing left to play for this season. The atmosphere at the ground will be electric, with this being the final home game of the season.

Another match which on-paper looks relatively straight-forward. Chelsea had been poor all season, and have nothing left to play for but pride. They also findthemselves sitting in mid-table, 1 place above Everton, so unless they decide to put on a performance for their home fans it could be a crowning game for Leicester. Chelsea fans may find themselves cheering for a Leicester win, if at this stage Tottenham Hotspur are in with a chance of pinching the title.

From the 4 games remaining you’d expect Leicester City to pick up 9 points out of a possible 12, with a tricky away game vs Manchester United the only remaining fixture that looks slightly difficult. Whatever does happen, we can’t wait to watch it all unfurl and would love to see Leicester crowned as Premier League champions – probably as do many other Premier League fans.