Home » News » Do Liverpool Have The Mettle to Maintain a Strong Premier League Title Challenge? 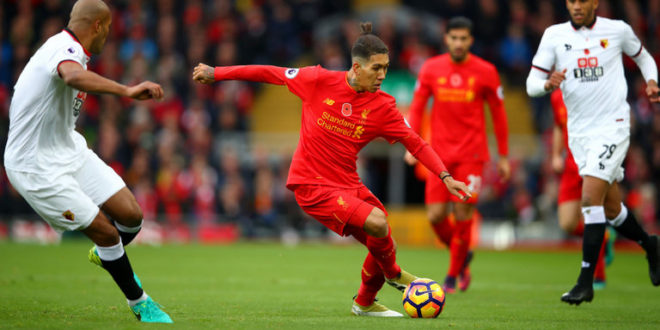 Do Liverpool Have The Mettle to Maintain a Strong Premier League Title Challenge?

Liverpool‘s 6-1 thrashing of Watford at Anfield took Jurgen Klopp’s men to the top of the Premier League table for the first time since May 2014 and extended their impressive unbeaten run to 12 games.

Jurgen Klopp’s men produced a rampant and dominant display that continued their eye-catching and bum-off-seat performances. Their thrilling attacking performances are further strengthening their case to be strong contenders for the Premier League title come May, and with what Leicester achieved last season, who can put it past Klopp’s men to mount a similar challenge? The performances and style of play is vastly reminiscent of Brendan Rodger’s side in 2013/14 with the attacking trio of Luis Suarez, Daniel Sturridge and Raheem Sterling who set the Premier League alight and almost led the side to their first Premier League title since 1990.

How times have changed – only Daniel Sturridge remains at the club from the trio that ran riot under Brendan Rodgers in the 2013/14 with Raheem Sterling enjoy greener pastures at Liverpool’s potential title rivals Manchester City and Luis Suarez running riot over in Spain along with Neymar and Lionel Messi. This season, the Liverpool fans have the luxury of watching Coutinho, Firmino and Sadio Mane at their fluent best. Already this season, the front 3 have 16 goals between them in the League this season; a tally similar to the one held by Sterling, Sturridge and Suarez at the same point in the 2013/14 season. With Mane, Coutinho and Firmino terrorizing opposition defences, Daniel Sturridge who holds such an impressive with the football club since his move from Manchester City is from the outside looking in; the England international can’t even get into Klopp’s staring XI because of the form of the present attacking trio.

The Reds are aiming to go the full distance under Klopp this season, and their first 11 games has already built up optimism and hope as the season continues to take shape.

A look back at the 2013/14 Premier League season shows they sat second at the same stage of that campaign, and this year they are already three points better off and scoring nine more goals which shows the true representation of Klopp’s impact and the identity he is instilling into his men.

The aggressive, fast and effective attacking football is what Klopp so thrived on in his time at Borrusia Dortmund – season after season – his Dortmund side proved a constant thorn to Bayern Munich’s title surge leading the club to back-to-back Bundesliga titles in 2011 and 2012, as well as the DFB-Pokal in 2012, the DFL-Supercup in 2013 and 14 and their second appearance in a UEFA Champions League final in 2013. With the attacking firepower of Mario Gotze, Shinji Kagawa, Ilkay Gundogan, Marco Rues and their talisman up front Robert Lewandowski, Jurgen Klopp was able to not only showcase the talents of those at his disposal but also his attacking philosophy was always in full swing especially in his back-to-back Bundesliga title triumphs.

As we’ve seen with Liverpool’s line-ups this season, its seems as though Klopp is instilling the same set-up at Anfield with Roberto Firmino, Philippe Coutinho, Sadio Mane and Adam Lallana acting as his main attacking threat.

Liverpool smashed in a whopping 101 goals in 38 games in the 2013/14 campaign, and have already got 30 goals in only just 11 games, they are scoring at an incredible rate of 2.7 per game. At this rate, Liverpool are on course to enjoy another fruitful season,  a season that could become a celebratory one come the month of May. The question that could throw up much debate surrounding the ability and nature of Klopp’s men is do they have the mettle and longevity to maintain strong Premier League title challenge throughout the whole 38 game season?

After the thrashing against Watford on Sunday, Klopp played down talk of a Premier League title challenge despite his side topping the Premier League for the first time since May 2014:

“We’ve started collecting points, but we need to go on with this. Then we will see where we can end.”

Liverpool, who last won the title in 1990, led the table going into the final weeks of the 2013/14 season but a home defeat at the hands of Jose Mourinho against Chelsea – the game the featured the infamous slip by Steven Gerrard – and the draw at Crystal Palace in their final three matches proved ever so costly as Brendan Rodgers failed to close out the season by grinding out the right results in order to finally capture the Premier League title for the Liverpool faithful.

Certainly, Klopp is correct, this isn’t the same Liverpool team two or three years ago or even 25 years ago. This year’s side has a different feel, Jordan Henderson and Philippe Coutinho are the only 2013/14 starters to have survived, but they are adhering to new roles under Klopp. Despite his eagerness to play down Liverpool’s title chances this season – a psychological statement if anything – innately, there is the sense of belief within the German coach that this maybe his year.

There is more than a hint of the attacking class Liverpool are showing in the current form that is replicating the style of Brendan Rodger’s 2014 team. The victory over Watford was the fifth time this season that Klopp’s Reds have scored four or more goals this season – and we’ve only played 11 games. Luis Suarez and co managed that feat in 11 games across the whole of the 2013/14 season. If Liverpool continue at their present form, they will score four goals or more in at 15 Premier League games this season. None of the attacking trio in the current Liverpool 11 adhere to a conventional “No.9” we would associate with the greats we’ve seen over the years at Liverpool but the way in which Klopp is transforming and breaking those conventions is quite damning considering all the top sides – bar Arsenal to an extent – current play with a central striker up front.

Roberto Firmino, Sadio Mane and Philippe Coutinho aren’t built like the traditional “No.9”, neither can their style of football be classed as the sort but the way in which they understand each other on the pitch, the way they are able to mix their different abilities to becoming the most feared attacking trio in the Premier League just tells you all you need to know about the impact and the imprint Jurgen Klopp is drilling into his team – the sort of thing he succeeded in at Borussia Dortmund.

So we ask the question again: Do Liverpool have the mettle and the longevity to go on and maintain a strong Premier League challenge this season?

It’s too early to say whether Klopp’s men can go all the way this season, the title isn’t won before Christmas but there are a number of reasons to why they can mount a serious assault towards the title. Liverpool do not have the added worries of European football midweek which allows them to fully recuperate and rest before another Saturday/Sunday game. The rest of the top sides do play European football; Tottenham, Man City, Arsenal and Leicester City all participate in the Champions League while Jose Mourinho’s Manchester United compete in the Europa League which means that there a lot of points to be won and lost till now and the end of the season.

Jurgen Klopp really is building something special at Anfield, and their current form at point just proves the impact and belief that the German coach has built around the club. Leicester City did the Unthinkable last season. Who’s to say Jurgen Klopp’s men can’t go on to do the same?

We are in for a very special Premier League season…