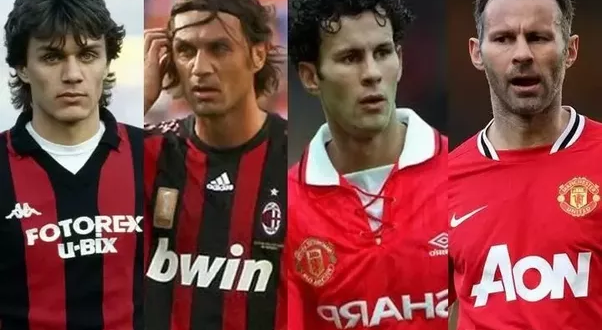 In recent weeks football fans have seen two of the greatest Premier League players of all time switch teams after a long and loyal stay at one club. Wayne Rooney has left Manchester United after 13 glorious years at Old Trafford and joined his former, and boyhood team, Everton, while John Terry AKA ‘Mr Chelsea’, spending an incredible 22 years with The Blues, has signed for Aston Villa. Both unique, fantastic players in their own right who have committed the best part of their careers to Manchester United and Chelsea respectively, Rooney being a ‘two-man’ club player, Terry now a ‘three’ having transferred to the Midland’s club, but who are the greatest footballers to have only ever played for one club for their whole career?

A devotion to a single football club is something special, resulting in legendary status and adoring fans, but in the modern footballing era of high wage demands, agents fees, and big money moves, these loyal long-staying legends can be rare. However, the ones who have committed themselves to one football team are exceptional and extraordinary, so let’s take a look at the greatest longest staying, most loyal legends of the game, who have dedicated their entire football career to one club…

This one-club-man really is a true football legend and one of the greatest players in the history of the game. He has won countless honours, and amazingly he did this whilst spending his whole 24-year football career at one club, his beloved AC Milan. If you count his youth career with the Italian club, which began in 1978, Maldini committed an incredible 31 years to the Serie A side. After a successful period in the youth team, he won the Coppa Italia Primavera, before making his debut in the Milan first team at the age of 16 against Udinese in January 1985. Becoming a regular first team player at the start of the 1985/86 season, Maldini was to stay with the San Siro club for the next 25 seasons making 902 appearances, scoring 33 goals, winning seven Serie A titles, one Coppa Italia, five Super Coppa Italiana cups and five Champion’s League trophies. Pure class and pure devotion to AC Milan.

This wondrous Welsh winger tops Manchester United’s all-time appearance list with an incredible 963 appearances during a phenomenal career spent entirely at Manchester United over an extraordinary 24-year period. ‘Tearing you apart since 1991’ the Old Trafford banner states, and that is exactly what this skilful, fast-paced, talented winger did since making his debut at the age of 17 against Everton in March 1991 after signing for the club professionally in 1990. From that moment, the Welshman terrorised defences with his flicks, tricks, dribbling and speed, as well as scoring some fantastic goals – who could forget his FA Cup semi-final goal against Arsenal in 1999? Running with the ball from his own half, Giggs outwitted The Gunners defence to score one of the greatest goals ever. But his records and honours do not stop there, others include: 13 Premier League titles, 4 FA cups, 3 League cups, 2 Champion’s Leagues, PFA Player of the year and much more. Ryan Giggs was one of the greatest footballers in the history of the game and he stayed loyal to the club and manager who gave him his first opportunity in football.

This Italian great dedicated 25 years to Roma before bidding an emotional farewell at the end of last season. This record-breaking world-class forward player was playing into his fortieth year when he called time on his Serie A career, finishing with a spectacular 250 goals in total in the Italian league, and 307 in all competitions for Roma. Although he did not win the Champion’s league, he is the oldest player to score in the competition and he achieved five major honours with Roma including the Serie A title in 2001. Gifted and elegant, Totti earned praise from the best, Michel Platini said he was ‘an artist of football, a true number 10’, but it was the fans of the Italian club that loved Totti the most. They were in tears, as well as his team mates, as the striker delivered his goodbye speech at the end of his final match against Genoa. Serie A top scorer, Serie A young and player of year awards, Serie A goal of the year, along with many other records and accolades, Francesco Totti was one of Italy’s greatest footballers and world’s best, all this achieved with a love and devotion to one club.

This world-class midfield maestro spent a stunning and incredibly successful 21 years with Manchester United. He was spotted playing football at school by a Red Devil’s scout and the rest is history as they say. Treble wins, 11 Premier League titles, 3 FA Cups and 2 Champion’s Leagues, the quiet Salford born Scholes impressively moved through the ranks at Old Trafford to become a first team player scoring two goals on his debut against Port Vale in the League cup in September 1994 after signing for the club only three years earlier. Just over two decades later and this local boy had become one of the greatest midfield players in the world and went onto make 718 United appearances and score 155 goals – many hitting the back of the net with power and from distance, a skill he was renowned for. As well as his goal scoring talent, Scholes was also famous for his accurate passing, great movement, defensive as well as attacking play, intelligence, vision and the ability to play any midfield position – Paul Scholes had it all, a complete outstanding footballer who displayed his magnificent talent at one club only, loyal and legendary.

The above four footballers all played for over 20 years at one club only, something very special and to be admired. Not only were they all world-class players in their own right, but they wanted to stay at the club that had given them the chance to become a professional footballer – faithful as well as being fantastic on the pitch. Of course, there are others we haven’t mentioned who dipped just under the 20-year longevity; Gary Neville – 19 years at Manchester United, Tony Adams – 19 years at Arsenal, Steven Gerrard – 17 years at Liverpool and Xavi Hernandez – 17 years at Barcelona. All top players with a tremendous devotion to a single club.

Longevity, loyal, legends – three words to sum up the special and superb one club footballers.