Mario Balotelli – Why Always Him?

Sunday’s antics at Emirates Stadium threw perennial trouble maker Mario Balotelli back into the headlines after a red card against Arsenal. Donning a t-shirt reading “YOU ONLY LIVE ONCE” to reveal if he found the net, Balotelli’s intentions are clear. He feels it is all about him. Who else would expose the message “WHY ALWAYS ME?” when he scores a goal? 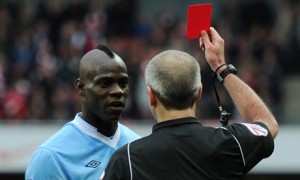 Don’t get me wrong, Balotelli provides fantastic entertainment for the media and fans, but he has taken it a step too far in recent weeks, letting personal actions to make a name for himself get in the way of his job he is very well paid to do. To help Manchester City win football matches.

An on the field bust-up with team-mate Aleksandr Kolarov over who would take a free kick was followed a week later by a horrendous ‘tackle’ on Alex Song, catching the Cameroonian high on the knee. After getting away with that unpunished, most players would do all they could to keep a low profile for the rest of the game. But oh no, not Super Mario. He proceeded to collect two yellow cards and also got away with a couple more bookable offences to leave his Man City career in tatters. 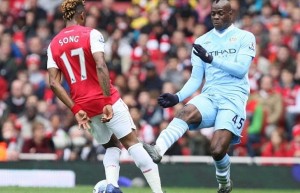 Despite being sent off with his side losing a match in which they had to avoid defeat, Balotelli strolled off the pitch (until boss Mancini hurried him along) showing his true colours are that of Mario Balotelli, not Manchester City.

The players are frustrated with him as Joe Hart showed when the Italian forward was sent off on Sunday. The fans are no doubt starting to lose their patience after no less than four dismissals already in his two year City career. But has the manager, who has stood by the 21-year-old despite a whole host of alleged activities from throwing darts at youth team players to setting his bathroom alight after letting off a firework, finally had enough.

“I’ve finished my words for him. I hope for him he can understand he is in a bad way for his future”, said Mancini after Sunday’s defeat to Arsenal which leaves their title challenge all but over.

So yes Mario, you do only live once. But you may never play for Manchester City again. 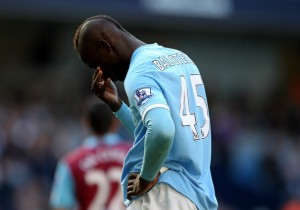