Home » News » Massimiliano Allegri Should Be the Leading Front Runner to Replace Arsene Wenger at Arsenal. 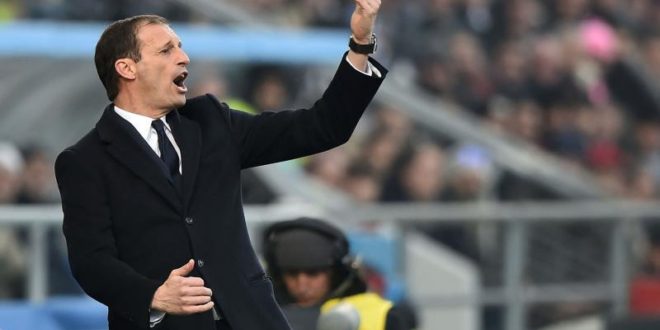 Massimiliano Allegri Should Be the Leading Front Runner to Replace Arsene Wenger at Arsenal.

After a turbulent few weeks in the Arsenal camp – stemming from the humiliating 5-1 defeat at the hands of Bayern Munich, speculation has increased regarding the future of Arsene Wenger. Ex-players and fans have grown frustrated at the lack of desire and commitment throughout the Arsenal team – leading many to believe that the problems are arising from the Arsenal management.

Ex-players such as Ian Wright, Thierry Henry and Martin Keown have voiced their concerns and disappointment at the performances of late especially the Munich defeat in the Champions League. Ian Wright on BBC Radio 5 Live and Match of the Day publicly stated that Wenger personally revealed to him that he thinks his time in the Arsenal dugout is drawing to a close.

Although Wenger may have openly stated his desire to put pen to paper and sign a new agreement with the Arsenal hierarchy, it has failed to put an end to the rife speculation about who may replace the French coach. The potential vacant position at Barcelona with Luis Enrique leaving at the end of the season, a few rumours have spread on Wenger becoming the new coach at the Camp Nou. Asked if he would be tempted in taking over from Enrique, Wenger said:

“No, my preference has always been the same and will remain the same. I am not looking for jobs in other clubs or jobs for other people. I am just focused on me.”

Wenger may have openly dismissed his interest in the Barcelona job but his future at Arsenal is still up in the air. The Frenchman has yet to sign a new contract with the Gunners, despite his current deal expiring at the end of the season. Wenger, 67, has reiterated his desire to continue managing next season whether at Arsenal or not.

What remains to be seen is whether Wenger will sign the new Arsenal contract offered to him, and with Arsenal being at the centre of controversy and criticism in recent weeks, the future of Wenger – a man who has established and imprinted a legacy that will be at the forefront of the future of Arsenal football club for many years, certainly the growing frustration surrounding the fans and ex players is understandable but there is the danger Arsenal may find themselves in an even worse position if Wenger is to eventually call it quits in the summer which may force the board to stick with Wenger for another year and keep the club afloat.

Amidst of all the rumours and speculation on Arsene Wenger’s potential successor, one name has been ringing around more than anyone else – a name that may not spark fires and excitement around the Emirates but a name of proven winner, a born leader and a man who is course to register yet another domestic double to his belt at Juventus – Massimiliano Allegri.

The man in the Juventus hotseat has reportedly told friends he has decided to leave the club to become the new manager at Arsenal at the end of this season, according to various reports in Italy. Although he has openly denied these rumours according to Sky Sports, we can’t rule anything at this point, stranger things have happened.

The Italian has been strongly linked with replacing Arsene Wenger and appears to be keen on joining the likes of compatriot Antonio Conte in the Premier League which will serve up an interesting start to the 2017/18 Premier League season with a host of top quality managers plying their trade in the English top-flight. If Allegri was to become Arsenal manager, he would be joining the likes of Antonio Conte, Jose Mourinho, Pep Guardiola, Jurgen Klopp, Mauricio Pochettino, Slaven Bilic and Ronald Koeman – a list of some of the top quality coaches in World football.

The 49-year old is into his third season as Juventus coach, but the search for his replacement has reportedly already begun as he has chosen to move on and take on the chance to replace Arsene Wenger at the Emirates. According to Italian newspaper Calciomercato, Allegri has been involved in a number of bust ups with his players most notably with Leonardo Bonucci after a recent win over Palermo. And the former AC Milan feels he has not been backed by the club chiefs which has led Allegri to tell friends he will try his utmost best to end this season on a high with Juventus still in with a chance on completing a treble with the Serie A, Coppa Italia and the Champions League up for grabs.

So what will Massimiliano Allegri bring to Arsenal if he was to become manager next season?

Sure, Allegri isn’t as beloved as the other candidates to replace Arsene Wenger, but he has something to his CV that none of them can boast about, and that is trophies. Major trophies. He’s won the Serie A title three times once with AC Milan and twice with current champions Juventus. The club is on its way to completing a third Serie A success under Allegri barring a complete self-destruction. Juventus are currently top of Serie A and Allegri looks like making it 3 league titles in a row, 4 league titles overall. In comparison, Arsene Wenger, has only won the Premier League three times in his 20 years as Arsenal manager. Certainly, the Premier League is a different kettle of fish, but look if we look at what Allegri’s fellow compatriots have achieved – last season Claudio Ranieri done the unthinkable and won the Championship with Leicester City and now Antonio Conte, former Juventus and Italy coach is about to reclaim Chelsea‘s Premier league crown in his first season in England.

Moreover, in his first season as Juventus coach, Allegri guided the club to Champions League final. Although they were outclassed by Barcelona at the final hurdle, it was an achievement that had never been reached by his predecessor. He also impressively beat Real Madrid in the semi-final in that year, where Madrid were shoe-in favourites to meet Barcelona in the final.

Also, Allegri has also won the Coppa Italia for the last two seasons, completing and then retaining a domestic double. As things stand, Juventus are on course to make the final of the Coppa Italia again, meaning if Allegri was to leave at the end of the season he will have won three domestic doubles in a row. An incredible personal feat.

Allegri would bring steel and a winning mentality. Something Arsenal have been crying out for a number of years. Maybe the time is right for fresh ideas at the Emirates, and Allegri could be the man. So what else could he bring to the Arsenal camp?

When Arsene Wenger picks a formation, he sticks to it. Wenger’s hallmark for a number of years has been the 4-2-3-1 formation. Even if it doesn’t fit the players available, Wenger would always turn to the style which makes us question his tactical flexibility and nous? There’s no doubting the ability of Wenger and what he has achieved but is clear his inability to adapt his tactics has hindered Arsenal for a number of years – maybe the reason they have not won the Premier league title since 2005. Why not try the nous of Conte or Mourinho who adapt their tactics and playing style according the opposition, Wenger’s problem is that he always seems to focus on the way his side is playing and not focusing on how the opposition can affect his team which has led to his downfall in a number of big games this season.

Allegri, on the other hand is tactically flexible. Throughout his managerial career, one of his defining traits is his ability to change formation and style during a match if things are not going in his teams favour. His use of the different variations such as the familiar 4-2-3-1, the three at the back system (3-5-2) and the 4-3-1-2 have become a saving grace for Allegri during his time at Juventus and if he was to make the trip to the Emirates this summer, it is a change that the Arsenal faithful will have to get used to and one which could be once again Allegri’s plan if he was to take the reigns in North London.

Overall, Max Allegri might not be the glamorous managerial appointment that the Arsenal faithful want. But he is the probably the best candidate for the job, an almost impossible job taking over the reigns of one of the greatest managers ever to grace the game. Maybe it is time for fresh ideas at the Emirates. Allegri’s record proves he is a born winner, it is just what Arsenal need.