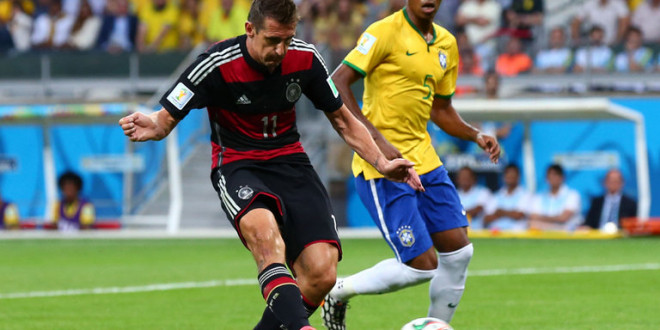 German Miroslav Klose made World Cup history on Tuesday night, passing the Brazilian Ronaldo (who was in attendance) for the most goals ever scored at the World Cup Finals with his 16th career goal slotted past Brazil ‘keeper Julio Ceasar during Germany‘s 7-1 thrashing of Brazil in the first Semifinal of this World Cup. Klose’s record-setting goal came on 23 minutes for “Die Mannschaft”, who carved up Brazil’s defense throughout the night at the Estadio Mineirão in Belo Horizonte. Klose’s goal kicked off a six minute period in which the Germans scored four times, putting the game completely out of Brazil’s reach as they took the 5-0 scoreline into the break before going on to the eventual 7-1 final score.

Klose’s historical goal is a result of the man’s continued success at World Cup tournaments, as he has now scored at the last four tournaments (2002, 2006, 2010, 2014), with multiple goals scored at each one. Klose will have a chance to add to his now record World Cup goal tally come Sunday night as well, with Germany still having one more contest to go in the form of the World Cup Final at the Maracana in Rio de Janeiro. Klose, not surprisingly, is also the German record goal scorer, notching 71 goals in 136 appearances for his national side.

Klose’s record goal (Germany’s second of the game) can be seen below, with Thomas Muller quite literally dribbling the ball right to Klose’s feet before the Lazio man finished past Ceasar at the second time of asking following a decent stop from the on-loan QPR net minder.