Home » News » What next for Arsenal? 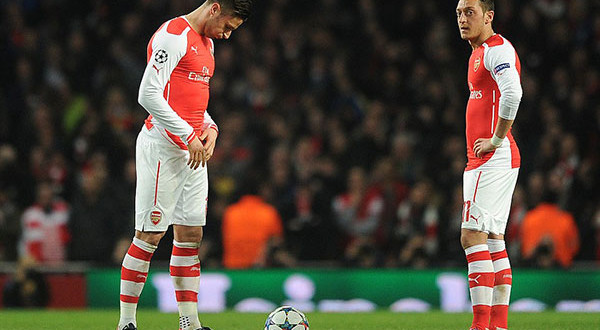 What next for Arsenal?

So, it really did happen. Arsenal’s supposed dream Champions League last 16 draw turned into a nightmare with a horror show against Monaco to leave their European hopes all but over for another year.

But where do the Gunners go from here? With five teams realistically in with a chance of nicking the final two Champions League spots in the Premier League and an FA Cup quarter final at Old Trafford on the horizon, Arsene Wenger’s men cannot afford to let this huge setback affect the rest of their campaign. So what are the key areas that will be giving the manager plenty of food for thought ahead of Sunday’s clash against Everton:

Time for Gabriel to start?

Wenger surprised many by going out in the January transfer window and signing an established centre-back. Gabriel was brought in from Villarreal on the back him becoming an ever-present during an impressive first half of the season which saw the ‘Yellow Submarine’ concede just 17 goals in their first 19 La Liga games and go 18 games unbeaten.

The language barrier is cited as an issue with the Brazilian currently speaking no English but he looked solid on his debut in the 2-0 FA Cup success against Middlesbrough. Per Mertesacker’s bizarre attempt to block the opener against Monaco saw Geoffrey Kondogbia’s effort fly in off him, before the German World Cup winner inexplicably dived in allowing Monaco to break with two against his centre-back partner Laurent Koscielny with Dimitar Berbatov duly finishing off the attack.

While Mertesacker is undoubtedly an experienced centre-back with plenty of strengths, 24-year-old Gabriel must be wondering if he will ever get into the side after some of the recent defensive displays, including nervy wins over Crystal Palace and Leicester and defeat to Tottenham and especially after Wenger described yesterday as “suicidal defensively”.

Is Cazorla the answer in central midfield?

Another huge dilemma is that of Santi Cazorla. His form in recent months makes him a first name on the team-sheet but there are two key concerns with him playing as a deeper lying midfield player. His exceptional vision and quick footwork is often wasted, compared to when he plays in his natural ‘number 10’ position.

Also, is he solid enough defensively? Francis Coquelin has earned plenty of plaudits since his return from a brief loan spell at Charlton, but he cannot do it all himself. It all appears rosy when the Gunners have something to protect, as they did when they went 2-0 up against both Palace and Leicester, because the whole team can dig in for a clear cause but when a game needs chasing, defensively the centre-backs can be left horrendously exposed.

Is the Bellerin/Gibbs combination too attacking?

On the same token, the second and third goals against Monaco highlighted the potential frailties of playing both Hector Bellerin and Kieran Gibbs from the start. The pair offer plenty going forwards, probably both more than their counterparts Calum Chambers and Nacho Monreal, but playing against a side who are notoriously solid defensively and dangerous on the break, was that a naïve decision?

Monreal has been criticised in the past but recent displays have seen the Spaniard rightly credited with his increasingly impressive defensive displays. It may be too simple to just suggest if he were playing, Arsenal would have had more men back to defend the counter attacks but his spell playing at centre-back earlier this campaign has certainly appeared to have made him wiser to the need to help cover at the back.

Who is the club’s best goalkeeper?

Wenger repeatedly states that Wojciech Szczesny is his “number one” but unless he restores him for the biggest games, it will merely be his shirt that says so, not the team-sheet. The Pole endured a difficult start to the campaign and was dropped out of the side, similar to last season when Lukasz Fabianski briefly took the reins. That spell out of the side appeared to help the young stopper, who recovered some fine form towards the back end of the campaign.

The case of David Ospina is a very curious one. He often appears to be in the right place at the right time and often keeps clean sheets. Some of his early displays came and went without him being unduly tested but a big error cost the side at White Hart Lane, while a wild attempt to punch clear in stoppage time at Selhurst Park at the weekend so nearly saw the Gunners drop two points.

Some have criticised the Colombian for Monaco’s first goal, but that does appear harsh and as Wenger pointed out in his post-match press conference, “they are the most dangerous deflections, if you don’t face the ball”, which implies he is more frustrated at the part played by Mertesacker than Ospina.

But the 26-year-old could feel he may have stopped the potentially decisive third strike. Again he was not helped by his defence but from that angle, it has to take something special to find the net. Ospina made a big stop to deny Anthony Martial from making it 3-0 but after getting a hand to Yannick Ferreira-Carrasco’s low effort, a top class keeper would really expect to keep it out.

With that all said, Sunday’s starting XI is sure to be an intriguing one. Wenger said “mentally we were not ready enough” which seems like a damning indictment of a side about to battle for a place in the quarter finals of the Champions League. But will he keep faith with those who let him down in such a huge occasion?