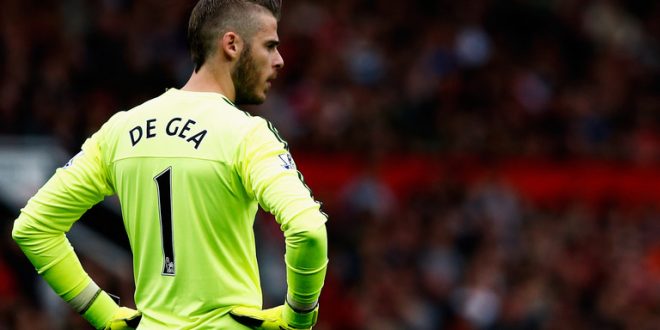 Not only is David De Gea Manchester United’s number one goalkeeper, but the Spanish international has to be considered as the number one shot stopper in the world. Leading the race to win the golden glove award this season and only one match away from reaching 300 appearances with United, De Gea’s point-blank saves, shot stopping with his feet, and match saving ‘keeper performances have improved beyond incredible at times, but what is more incredible than a De Gea double save, is that this Spanish star was written off by the media when he joined the Old Trafford club nearly seven years ago. Fans and pundits were also sceptical, but the former Atletico Madrid player has turned his shaky start on its head and is now deemed to be one of the best, if not the best, goalkeepers in the game.

Joining Manchester United in 2011, a rather lean, edgy De Gea, with no experience of the Premier League, became the club’s new number one between the sticks. His inexperience showed, however not to the extent where he warranted being written off by the English media, the criticism being enough to give the new Old Trafford goalie a serious complex and hinder his career, but with his manager’s backing and given time to adjust, the Spaniard turned his unsteady start at United dramatically around.

Since those early days of criticism for conceding goals against Man City in the Charity Shield and West Brom on his Premier League debut, the United number one has come a long way. He has twice been named the Manchester United Players’ Player of the Year, and is a three time winner of the Sir Matt Busby Player of the Year trophy making him the only United goalkeeper to ever win either award.

Awards is something this great goalie is used to, he has won seven major honours with United including the Premier League. Individual awards are also common practice for De Gea, he has been enlisted in the Premier League team of the year four times as well as having a quadruple of ‘saves of the season’ to his name. As well as awards, stats, records and outstanding performances are also credits the Spaniard has to be proud of.

Since the early days of supposed doom, De Gea’s shot stopping has gone from strength to strength, hence signing a new contract with The Red Devil’s, although this hasn’t stopped Real Madrid’s persistent interest in the player showing just how far he has come with the best in Europe wanting his services. Of course, great goals are constantly replayed, but De Gea’s saves are fast becoming a collection definitely worth seeing over and over again. A deflected Smalling shot against Watford in 2015, which the Spanish goalkeeper superbly tipped away is one of his greatest saves and it earnt him yet another Match of the Day save of the season. So many times, he has made saves that have meant United have claimed all three points instead of one, last ditch shot-stopping that has turned a draw into a win for his team – his saves have been as good as any goal for United at times – a wonderful fingertip save in 2014 against Everton meant a 2-1 victory rather than a 2-2 draw is a prime example.

However, with many super saves and perfect performances in the last seven years, De Gea’s greatest game in a red shirt (well green being the goalie) was reserved for this season in a match that saw the whole team play brilliantly beating Arsenal 3-1, yet it was the Spanish star between the sticks that stole the headlines with a quite incredible display. He made 14 saves during the match, which is a record in a Premier League game, those super-shot-stops included an outstanding double save from close range, hands and then feet, as well as an excellent save from Lacazette.

As well as super saves and great goal keeping, De Gea’s distribution isn’t bad either. Always looking to set up a counter attack from the back, his kicks down field are pretty accurate as well. A prime example is against Spurs earlier this season, Martial’s winner started from a De Gea goal kick, he found Lukaku who flicked on for the Frenchman to find the back of the net – all started by United’s number one.

With 14 clean sheets to his name this season, De Gea tops the charts with that total so far in the Premier League this season, as well as this, the Spaniard is joint first in the league with Chelsea’s goalkeeper for least goals conceded, only 16 this term have slipped past United’s man between the sticks. The stats and records just keep getting better and better for David De Gea, as do his performances, although the words more and more phenomenal would be more appropriate.

After David De Gea’s incredible match against Arsenal, Jose Mourinho said ‘what I saw today was the best goalkeeper in the world,’ and it is fair to say anyone involved in football would have to agree. Number one – it can only be David De Gea.