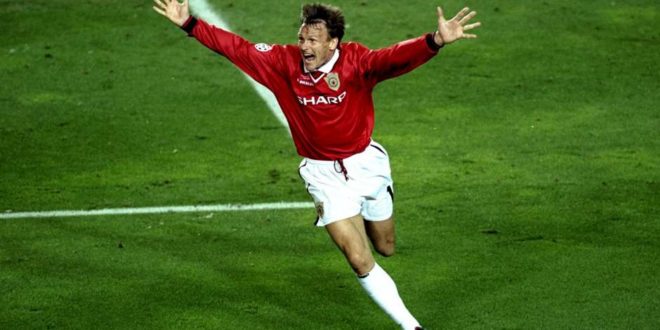 He wanted to win trophies, honest and to the point. After 14 years of playing professional football and without a major honour to his name, Teddy Sheringham would go onto prove good things really do come to those who wait.

It is 20 years since Edward Paul Sheringham signed for Manchester United in one of the surprise signings of the 1997 summer transfer window. Deemed as a replacement for the retired Eric Cantona, Sheringham was one name not mooted to be joining The Red Devils after a whole host of European candidates were linked to the club to replace the Frenchman. However, Sir Alex Ferguson saw the England front man as the perfect striker to fill the void left by the Old Trafford ‘King,’ and the opportunity for Sheringham to make a name for himself at Manchester United in his own right.

Teddy’s style of play was very similar to Cantona making him the ideal, yet unforeseen player, to join United. Add this to the fact that despite being a Londoner and with Tottenham in his heart, he couldn’t wait to sign for Sir Alex Ferguson with the intent of adding silverware to his already great footballing career. His preferred position was just behind his strike partner, in the modern era known as the ‘number 10’ role, the former Tottenham man would slot nicely into the hole left by Cantona. It was immense boots to fill, but with 454 professional football appearances behind him which included starts for Millwall, Nottingham Forest and of course, Tottenham Hotspur, and a regular player for England, this cockney lad was up for the challenge. Despite not quite having the flare for words or the upturned collar, two traits ‘The King’ was famous for, Sheringham was determined to carry on where the Frenchman left off.

However, after moving to Old Trafford in a £3.5 million deal, Sheringham’s dream of trophies and having an immediate impact were thwarted in his first season at United. An ironic first match of the 1997/98 season against his old Spurs team resulted in a frosty reception from his once adoring fans, followed by a penalty miss. Sheringham would go onto score 14 times for The Red Devils during his first term at the club but his expectations of winning titles ended in disappointment as did the season as a whole. Despite this setback, Sheringham would make up for those frustrations in dramatic fashion the following season…

As the 1998/99 season began, many thought Sheringham’s appearances would be limited and his input in the side would be restricted due to the arrival of Dwight Yorke, meaning there would be four strikers competing upfront; Teddy Sheringham, Dwight Yorke, Andy Cole and Ole Gunnar Solskjaer. However, with Sir Alex Ferguson’s tremendous squad rotation methods, his ability to convince every player they have a part to play, that they will get games and, most importantly, keeping each footballer in his team happy with the situation, Sheringham was every part of the manager’s plans as he was when he bought him and the former Spur’s man would repay the Scot with super-sub appearances, man-of the-match performances, and vital goals.

The season rolled onto what Fergie would call ‘squeaky bum time’ and whispers of an unprecedented treble were on everybody’s lips. Teddy’s desire for medals was about to turn into a collection overnight. Three match wins, three honours, and he would play his part in Manchester United’s, and his, greatest ever season.

Lifting the Premier League trophy after a 2-1 victory against his former side Tottenham had been the moment Sheringham had been waiting for. He came to Old Trafford for these special history-making days and finally he had a winner’s medal. However, Teddy saved his performance of the season for the 2-0 win over Newcastle in the FA Cup Final. Coming on as a substitute early in the match for the injured Roy Keane, Sheringham scored the opening goal after a slick team move then in the second half, he laid the ball off beautifully for Scholes to hit the back of the net. Job done, Teddy’s second piece of silverware secured. But perhaps the most important moment and goal of his career would come four days later in The Champion’s League final. 1-0 down against Bayern Munich, United’s treble chances and Teddy’s third medal in the space of ten days hung in the balance – cue another super-sub appearance. A scuffed shot by Giggs on the edge of the penalty area from a Beckham cross saw Sheringham turn the ball into the net to cause pandemonium in the United ranks. We all know how it ended, the ‘promised land’ reached, but significantly for Sheringham, he had scored a goal that would go down in Manchester United history and it was a strike that the team and fans alike would forever be thankful to Teddy for. He had waited 15 years for just one major honour, now the man from Chingford had three of the greatest medals in club football.

Sheringham would go onto win two more Premier League trophies with Manchester United and an Intercontinental Cup before moving back to Tottenham Hotspur in 2001. 104 Red Devil appearances, 31 goals, and what he had set out to achieve: win trophies. “Oh Teddy Teddy. He went to Man United and he won the lot” – history maker, treble winner, legend.