Home » News » Ole was always Gunnar be a success 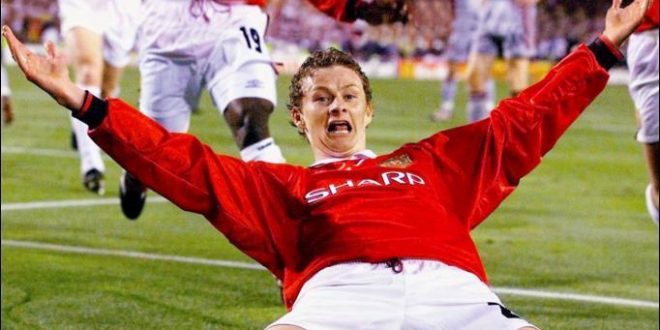 Ole was always Gunnar be a success

It is ten years since Manchester United’s baby-faced assassin left Old Trafford after eleven illustrious years with the club. Ole Gunnar Solskjaer will always be fondly thought of as not only a great striker for the Old Trafford team, but as a bargain buy, super sub and United’s saviour in the 1999 Champion’s League final – quite an impressive list of successes for a once unknown name from Norway…

Chasing the signature of Alan Shearer during the summer of 1996, Manchester United were odds on favourites to make the Blackburn striker an Old Trafford player and, at the time, a world record signing. However, with the Geordie desperate to return home to the team he supported as a boy, Newcastle United, The Magpies swooped in bringing England’s number one front man back to Tyne side. His failed attempt at signing his top transfer target meant Sir Alex Ferguson had to turn his attention to other striker options, many names were mooted, but when he brought Ole Gunnar Solskjaer to the club instead of Shearer many fans were disappointed and others asked Ole who? While the rest of the football world raised their eyebrows at United brining an unknown player to the Premier League. The Norwegian may have only cost Sir Alex Ferguson £1.5million but going from potentially buying one of the world’s best strikers in Shearer, to an unfamiliar front man from Molde FC felt like a case of going from hero to zero but after bargain buys like Cantona and Schmeichel in previous years, supporters and pundits alike should have known better than to doubt the buy of Ole Gunnar Solskjaer…

Many expected the Norwegian to spend most of his first season playing for the reserves with occasional sub bench appearances before making a step up to the first eleven – if he even got that far. However, he took everyone by surprise when he was named in the first team for United verses Blackburn and scored two goals on his Old Trafford debut. Suddenly, Solskjaer had gone from unfamiliar name to the striker on everyone’s lips. It was the start of something special for the baby-faced assassin. He scored nineteen goals in all competitions during his first season, not a bad return for a player no one had heard of and as a poor back-up buy to Alan Shearer, in fact Ole was only nine goals behind the Newcastle man in his debut season for The Magpies. As the song goes, ‘cheaper than f#!*ing shearer’ (£13.5million cheaper to be precise) the unidentified Norwegian was looking like the buy of the summer and fast becoming the talk of the Premier League and beyond.

However, it was United’s treble season, two years into his Old Trafford career, where Solskjaer set the world of football alight with super-sub performances, a title he would earn by coming off the bench to score critical goals, and he created records Shearer would have been proud of and would have liked to have achieved himself.

The first significant contribution to the record-breaking 1998/99 season was Solskjaer’s last gasp FA Cup 4th round winner against Liverpool. If it wasn’t for the Norwegian’s off-the-bench antics, there never would have been a 10th FA Cup for United let alone the historic trio of trophies. Coming off the bench, United having trailed Liverpool since the 3rd minute of the match, Solskjaer latched onto a Paul Scholes cut-back to net from just inside the penalty box after a late Dwight Yorke equaliser. Pandemonium erupted inside Old Trafford, a last minute winner against the old enemy – that’s what it meant to United fans – no one really knew at that point how major that goal would be in the course of the season.

Scoring four goals in any game is impressive for a player, but Ole did this by coming on as a sub again against Nottingham Forest in February 1999. It was another important feat in the treble season, keeping the heat on the chasing pack in the League and adding to an impressive goal difference. An 8-1 victory over Forest was outstanding, but Ole’s quadruple made all the headlines. More important strikes by Solskjaer followed during the treble campaign against Everton and Sheffield Wednesday, but of course no other as important and historic than his injury time winner in the Champion’s League final. ‘And Solskjaer has won it!’ was the cry from the commentator as the super-sub striker lifted the ball into the roof of the Bayern Munich net from a Beckham corner. It was a defining moment in Manchester United history and the rising name of Ole Gunnar Solskjaer, it was a strike that not only gave The Red Devil’s an unprecedented treble, but it would ensure a player who no one knew or were overly enthralled to have signed for a mere £1.5million, would go down as a hero and star footballer for United, with just that goal alone.

As previously said, the ‘super-sub’ tag attached itself to Solskjaer, especially after his Champion’s League heroics, others might like to call him a loyal team player, in fact he proved he was the latter when Spurs wanted to sign and offer him first team football in 1998. However, Ole stayed faithful to the club and manager who brought him to England and made him a star, preferring to stay with United and fight for his place and trophies – his reward the treble and more first team starts during the early 2000s before injuries limited his time on the pitch. In 2007 Ole announced his retirement from the game and his remarkable as well as fairy tale career at Manchester United.

91 goals and 235 appearances for The Red Devils, Solskjaer will not only be remembered as a fantastic player but also for his professionalism and of course, ‘that goal’ against the Germans. Super-sub, baby-faced assassin, or simply ‘Ole’, the unfamiliar man from Norway can claim many nick-names but when all is said and done he was a Manchester United superstar and much loved player who gave everything in a red shirt including memorable and incredible never-say-die goals. ‘Solskjaer, you are my Solskjaer’ will be forever sung at Old Trafford and rightly so for this unassuming yet quite wonderful player.