Home » News » The One That Got Away 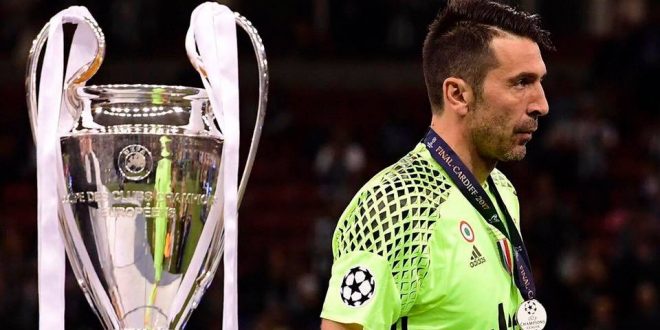 The One That Got Away

Juventus goalkeeper Gianluigi Buffon recently announced he will retire from the game at the end of the season unless the Italian giants win the Champion’s League (so he can play in the FIFA Club World Cup the following season) – this is the only trophy that has evaded this great shot stopper and the one medal he desperately craves to cap a wonderous career. So, this season is a case of ‘now or never’ for the Italian goalkeeper, can Buffon lift his first, and much deserved, Champion’s League trophy? It would be the perfect ending should he achieve his dream. However, if he doesn’t, Buffon will be in very good company…

It is not a list Buffon will want to be a part of despite it being full of some of the greatest footballers ever. The Champion’s league is a stellar trophy but there are some stellar names that never won this great club competition, Buffon will be hoping he is not added to the star-studded, top five greatest footballers below, who have a gap in their medal collection where this European achievement should be…

His longevity in the game and incredible career makes this player a football legend. His loyalty to Roma was staggering as was the player he became for the Italian side, the Serie A title his proudest moment in a Giallorossi shirt which he won in 2001. For the international side Totti won the 2006 World Cup, but one medal he would have been desperate to have won with his beloved Roma was the Champion’s League. Reaching the quarter-finals on two occasions, a player of Totti’s stature shouldn’t have ended his star-studded career without Europe’s top medal around his neck.

This great German midfield player was 38 years old when he finally thought he was going to fill the only space left in his medal collection with a Champion’s League honour. German titles and World cups are on the list of achievements by this fantastic footballer yet the day that iconic European cup was snatched away from him in 1999 by two injury time goals by Manchester United, would have haunted him until the day he retired – that was the year 2000, his former club Bayern Munich won the trophy a year later. This Ballon d’Or winner merited at least one Champion’s league medal.

Winner of the UEFA Cup with Juventus in 1993, Baggio is one of the best players of all time to not only have never won the Champion’s League, but he also barely played in the competition – quite incredible for a great footballer who played for six top Italian clubs including Inter and AC Milan as well as Juventus. Group stages and last eight appearances with both Milan clubs was the closet the ‘Divine Ponytail’ came to lifting Europe’s top football trophy during the 1990’s. An amazing footballer without the most amazing medal in club football.

One of the finest French footballers to have played the game, this World Cup and Euro winner with his country, missed out on European glory with all nine clubs he played for during an incredible 20 year career. He made 602 appearances in those two decades for teams including Barcelona, Inter Milan and Manchester United but he only manged to get his hands on the UEFA Cup, the main trophy escaped him, the semi-finals with The Red Devils in 2002 was the nearest this Frenchman came to lifting the Champion’s League – ‘Le President’ more than merited at least one European medal.

“I live football with a passion that doesn’t give me any peace for not winning the Champions League – it’s a trophy everyone would love to win.” – Those were the words of two time Ballon d’Or winner and a player that would have to be considered as one the greatest footballers ever. However, without that all important Champion’s League medal the brilliant Brazilian makes the list of greats to not have won Europe’s top prize when his career and incredible play deserved at least one medal. Club legend for Inter Milan and Real Madrid, the closest he got to European glory was a semi-final in 2003. Pace, skill, goals, a star at club and international level – this footballer had it all apart from a Champion’s League medal. He was the best not to win the best.

The above five footballers are some of the greatest players not to have won the greatest trophy at club level. Many of them will feel it was the medal ‘that got away’ as some came so close to adding the illustrious trophy to their star-studied honours list, but it wasn’t to be. Buffon will hope he is not added to these stellar names, and that he can realise his dream of becoming a worthy Champion’s League winner and enjoy European glory at least once before hanging up his boots and gloves for good.