R-E-S-P-E-C-T: FA to Bring Back Respect Campaign amid Ref Walk-Out

Remember the ad? Two contrasting Ray Winstones stood on a grassroots touchline. One berated the volunteer ref while the other stood by, calmly condemning his twin’s actions, in some kind of Sunday league ode to The Parent Trap.

Ironic as it was to receive a morality lesson from an actor famous for posting his adversaries into the Thames in concrete envelopes, the video made an important point.

But despite Ray’s best efforts, the problem has escalated and now, with a reported referee strike on the cards, the FA is rekindling its Respect campaign. First launched in 2008, the campaign has been criticised for its lack of progress in challenging one of the biggest problems in the game today.

However, maybe it is time for us, the players and fans in the lower tiers of the game, to take responsibility. Forget multi-million pound PR campaigns, the time has come for true fans of the game to stamp out this nonsense once and for all.

So remind players of their responsibility on the pitch, get behind the fan driven #NoRefNoGame movement and have a word with mouthy Derick when he steps out of line.

When we look up the footballing ladder we see a game that is rife with dissent and disrespect so, instead, why don’t we try to fix this issue from the ground up. Otherwise Ray will have us sleeping with the fishies. 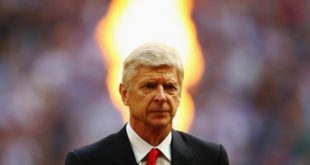 With critics calling for a heavy touchline ban, Arsenal’s season hangs in the balance. Arsene …