Stunning news broke today of an inspiring move as Roberto Martinez was named as Marc Wilmots’ replacement as head coach of the Belgian national squad.

Wilmots called time on his tenure in charge of the Belgians after they were bundled out of the European Championships by Wales.

Many names have been linked with the Belgian hot seat, but there was always one candidate who stood out above the rest. Having taken Everton to the dizzy heights of eleventh in the Premier league, Roberto Martinez was the obvious choice to take charge of a team ranked second in the world.

Martinez’ glittering CV includes guiding Swansea to the League One title in 2008, as well as marching to an FA Cup title with Wigan Athletic in 2013. The Spanish maestro also boasts a Premier League Manager of the Month award, an award the like of Pep Guardiola has never won.

Martinez has shown great ambition in his managerial career and believes that the Belgium job could be a stepping stone to bigger things:

“Who knows where I could go from here, perhaps I could become the next President of FIFA once I am done with Belgium, or even become the next Gary Neville at Sky Sports”.

The internet certainly found the appointment an inspiring one. 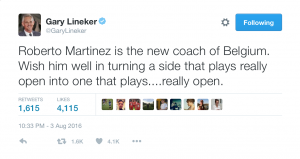 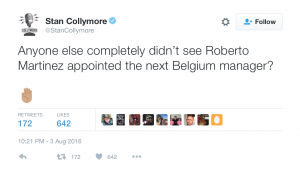 As did Romelu Lukaku.

Could Martinez be the man to finally crack the code to unlocking Belgium’s immense potential? I think Romelu answered that for us. 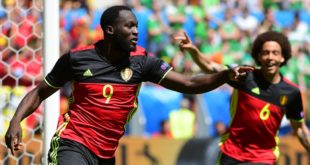 How to Get the Best Out of Belgium!

Belgium were expertly dismantled by Italy in their opening game of Euro 2016, and the …