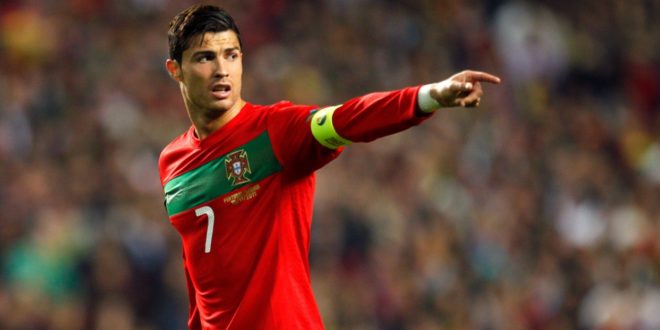 Portugal coach Fernando Santos is relying on Cristiano Ronaldo to use another impressive season as a starting point for a strong Euro 2016 campaign.

Only eight days after Real Madrid lifted the Champions League trophy thanks to Ronaldo scoring the winning penalty against Atletico, he joined his national team in training on Sunday. 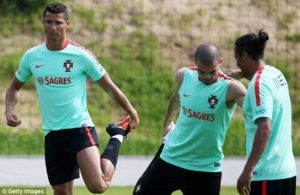 His presence is a boost for Portugal after losing 1-0 to England in a friendly last week. In Portugal’s final warm-up game, they are set to take on Estonia on Wednesday in Lisbon.

Before joining the team on Sunday, Santos told Spanish sports magazine Marca that he had wanted both Real defender Pepe and Ronaldo a chance to ‘rest’.

‘It’s better for everyone that they arrive happy and with the extra bounce after achieving their aims.’

In all competitions for Real Madrid this season, Ronaldo scored 51 goals in 48 games.

‘If he is so important for real, you can only imagine how significant he is for Portugal. Certainly the same or even more.

‘When you have players that score 50 to 60 goals per season, and who can always score, they are of vital importance, it’s impossible to quantify.’ 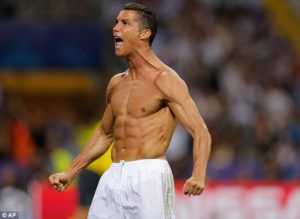 However, Ronaldo suffers from tendonitis, which not only is a fitness concern but has previously prevented him from performing his best at the 2014 World Cup when Portugal crashed out in the group stages.

‘There’s always talk that all the players must arrive at 100 per cent,’ Santos said. ‘But that is never the reality.

‘Obviously, it would be ideal if he was at his best but I would never stop calling Cristiano even if he was at 80 percent.’

Portugal came close to winning a trophy with the 31-year-old player at Euro 2004, however, were beaten by Greece in the final.

Then four years ago the team reached the semi-finals but were eliminated by Spain on penalties.

‘If we think of the generation of players we have had, it’s about time,’ Santos said

‘Portugal should have already won a European title but just like Spain, they took their time and now they have managed to win several trophies.’

Portugal is set to begin their Euro 2016 campaign against Iceland on June 14 in Marseille. They also face Austria and Hungary in Group F.