Home » Beer Money » How to Save Money with Sky Sports 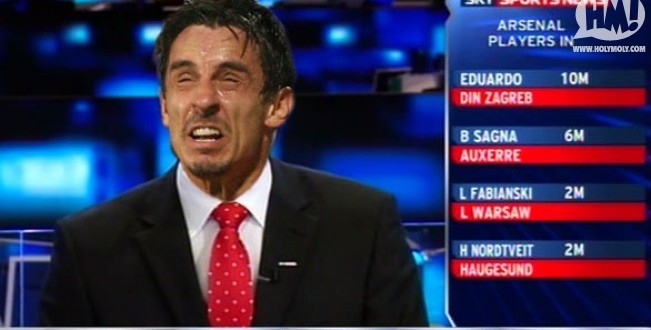 Gary Neville's face, when you phone up to cancel your Sky Sports subscription

How to Save Money with Sky Sports

Welcome to the first post in the Beer Money section of FootyBlog – this is where we’ll advise the typical football fan about ways in which they can save money whilst following their beloved team.

Football is a multi-billion dollar industry, and as football clubs and businesses look at further ways to milk as much money as possible from football fans, we feel that it’s important to minimise the cost of following your team. It’s not fair that it costs so much money to support a side, so Beer Money aims to look at saving your pocket, allowing you to spend on some of the more important things in life – such as beer!

In today’s post we’ll look at saving money from the huge corporation that is Sky TV. At the current time of checking, it will cost you a minimum of £43.50 per month to subscribe to Sky. That is £522 per year. Remember this is just for the minimum Sky Sports package – if you want things like HD then that’s going to cost extra.

We all know what the alternative is to Sky Sports – a random assortment of fixtures on BT Sport, with massively under-skilled punditry and game coverage. Then the next best free alternative is to find a stream online, which is going to be bad quality at best. If you want a reliable, constant stream with decent analysis and coverage then you’re going to have to bite the bullet and pay the £520 yearly cost. But there are some ways of minimising the amount you pay to Sky and Rupert Murdoch.

The first obvious option to save money with Sky is by cancelling when the season is finished. Your typical subscriber could have phoned up to cancel their subscription after the last Play Off game of the season, to save them approximately 2 months fees (roughly £85) and then simply phone up again to catch the start of the season. With the 2014 World Cup being televised on terrestrial TV, there wouldn’t really be much need paying for Sky over the summer, unless you’re addicted to watching rather meaningless tournaments like the Ajax Cup.

Phone up threatening to cancel

The second option for saving money with Sky Sports, and perhaps the best piece of advice you’ll read here, is to phone up and request to cancel your subscription. 9 times out of 10 the operator on the end of the line will tempt you into staying with them by dropping the price. As a business, if you phone up stating that you want to leave, that is to cease becoming a paying customer of Sky, it would be in their companies best interests to try and persuade you to stay. And the best way for them to do that is by offering you a better deal. We’ve heard of football fans who’ve rang up and have been able to get their monthly fee down to a reduced rate of around £35 per month. Obviously they’re still having to pay a relatively large fee, but it’s better than the standard rate.

It’s worth noting that if you’re phoning up to cancel Sky Sports and you aren’t offered a better deal by the operator, then don’t feel obliged to cancel! Perhaps just say you’ve had a change of heart, or you’ll need to speak to your wife before confirming (she obviously wears the trousers when it comes to money..) – don’t feel put out if this happens. The best method would be to phone up a few times and see what happens – you may get put through to another operator who may be more generous than the previous one, offering you a nicer deal.

Find a Voucher (new customers only!)

If you’re a new customer to Sky Sports it can be possible to get your hands on a 50% money off voucher. It’s definitely worth doing a quick search on Google – at the time of writing there are vouchers available (try Money Saving Expert for example) and it’s really just down to luck if you can get hold of them. This can save a huge chunk of your subscription fee, reducing the cost from £43.50 per month to £21.75 per month. If you can’t get your hands on a voucher and you’re patient then just wait around – Sky seem to release them in batches, and with the rise of BT Sport as they loosen Sky’s own monopoly on broadcasting football then it’s likely Sky will have to implement other ways to encourage customers to sign up, or to stay, with Sky Sports.

So there you have it, 4 simple ways to save money from your Sky Sports subscription. Let us know if you have any of your own hints or tips, or if you’ve tried this method out and had any success – just leave a comment below!