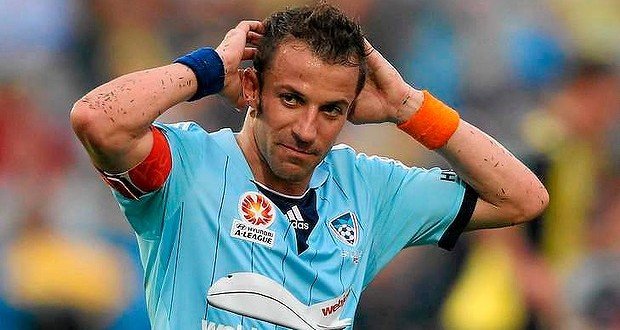 Australia has become a haven for some of Europe's ageing footballers, with Alessandro Del Piero being the most high profile player to make the switch to the A-League

Established in 2004, the Hyundai A-League is Australia’s highest level football league. It succeeded the National Soccer League which ran for twenty eight seasons, beginning in 1977, before disbanding in 2004. In its twenty seven year history, a total of forty two teams featured in the National Soccer League, forty one of those from Australia, and one from New Zealand.

Ten teams were registered for the 2013/2014 A-League season, with nine of those teams being situated in Australia, and the other (Wellington Phoenix) in New Zealand. The league runs through the Australian summer, beginning in October and finishing in April the following year.

An end of season Finals Series commences once the original season finishes. The Finals Series consists of the top six sides in the A-League, with the first stage, the Elimination Series, being played between the sides placed 3rd to 6th. The two sides that topped the A-League enter the following stage, the Semi Finals, and play the victors of the Elimination Series fixtures, with the winner of each game progressing in to the Grand Final. The team that wins the Grand Final becomes A-League champions.

Another past Premier League player that has ventured into management is Keven Muscat. Having spent nine years of his career playing in Britain, Muscat moved back to Australia in 2005 where he signed for Melbourne Victory after a spell at Millwall. After retiring in 2012, Muscat subsequently became manager of Melbourne Victory in October 2013 and, despite it being his first job in management, has guided Melbourne Victory to third in the A-League after twenty four match days.

Celtic’s Tom Rogic is on loan at Melbourne Victory and has emerged as one of Australia’s hottest prospects in recent years. The twenty one year old attacking midfielder moved to Celtic in 2013 from Central Coast Mariners, where he then made eleven league appearances before heading back to Australia. Rogic has been praised for his ability on the ball and his passing capabilities, and has already featured nine times for the national side.

Adelaide United’s Awer Mabil is only eighteen, but already possesses the ability to become one of Australia’s top players in years to come. The Kenyan-born winger’s sharp feet and strong dribbling technique helped him the 2012-2013 National Youth League Player of the Year award and has already notched up twenty two appearances for Adelaide in his short career.

Thirty six year old Englishman Emile Heskey is currently plying his trade at Newcastle Jets. The striker began his career at Leicester City before moving on the Liverpool on 2000 for £11m. He later featured for Birmingham City, Wigan Athletic, and Aston Villa before heading to Australia in 2012. Since his move to Newcastle Jets, Heskey has scored ten goals in the thirty nine games he has played.

Michael Bridges is another Englishman that is earning a living playing for Newcastle Jets in Australia. Bridges moved to the Jets in 2009 after an unsuccessful spell at MK Dons, playing only one game in his time at the club. The attacking midfielder is likely to best remembered for his five year stint at Leeds United between 1999 and 2004 where he made fifty six appearances. Since his time in Yorkshire, Bridges never really settled at an English club until his move to Australia, but looks to have found a suitable home in New South Wales, making sixty three appearances since his move.

Sydney-born Harry Kewell made the switch to the A-League 2011 when he left Galatasaray in Turkey for Melbourne Victory. The former Leeds United and Liverpool winger spent twelve years in the Premier League notching up two 274 league appearances in that time. Now thirty five and captain of Melbourne Heart, Kewell won fifty six caps for Australia before retiring from international football in 2012. In July 2012, Kewell was acknowledged as Australia’s greatest ever footballer at a gala ceremony in Sydney.