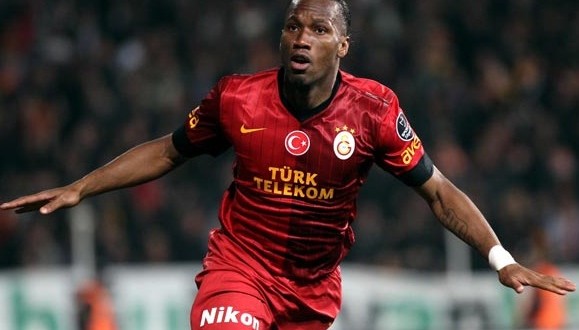 Since his arrival in January 2013, Drogba has notched nine league goals in 27 games for Galatasaray

Turkey’s Super League (Super Lig) was founded in 1959, after a number of individual city-based leagues joined forces to create the national Super Lig. Of the sixteen teams that competed in the 1959 season, only Besiktas, Galatasaray, Fenerbahce, and Genclerbirligi began the 2013-2014 season in the top flight. In recent times, the country has become an attractive destination for many household names, such as Didier Drogba and Anton Ferdinand, both whom joined their respected clubs in 2013. As of 2013, Turkey currently sits 11th in the UEFA country coefficient rankings.

The Super Lig is contested between eighteen teams, with each team playing 34 games in total over the season. In the league’s 54 year history, only five sides (Galatasaray, Fenerbahce, Besiktas, Trabzonspor, and Bursaspor) have won the Super Lig title, with Galatasaray winning the most (19).

The biggest club rivalry in Turkey is actually between three teams, Galatasaray, Fenerbahce, and Besiktas, mainly due to all three being based in the capital city, Istanbul. Many associate the Istanbul rivalries as possible the fiercest in Europe, alongside the Old Firm Derby in Scotland, and the El Clasico in Spain.

Over the years, the Super Lig has grown in popularity across Europe, and this has increased the amount of money that is available to the clubs involved. Revenue from television companies and sponsors has been increasing year on year, allowing clubs to complete many lavish transfer deals, like Galatasaray’s capture of Didier Drogba and Wesley Sneijder, and Fenerbahce’s purchase of Moussa Sow.

In order for the country to produce the best young players possible, the league employs a rule which allows clubs to register only eight foreigners amongst their list of players for the season. Along with this, only five of those eight can be included in a Super Lig match day squad at any one time, thus devoting a minimum of 13 places in the match day squad to Turkish players. However, this rule is not in place for European competitions.

With the extra income, Turkish clubs have been able to attract the most high profile of managers of late, with the most notable being Roberto Mancini, who joined Galatasaray in summer 2013. Mancini was sacked by Manchester City after a poor 2012-2013 campaign in the English Premier League. However, Mancini has vast experience of the Champions League and recently guided Galatasaray to the knockout stages of Europe’s biggest club competition.

Other big names include the former manager of the Croatian national team, Slaven Bilic, who is currently at Besiktas, and the ex-Real Madrid left back and World Cup winner Roberto Carlos, the current head coach of Sivasspor.

Ersun Yanal is the man who has guided Fenerbahce to top spot after the first fourteen games of the current season, with a total of 35 points. At 51, Yanal’s managerial career began in 1992, and since then has been in charge of Genclerbirligi, Trabzonspor, Eskisehirspor, and the Turkish national side.

Currently, the best performing Turkish manager in the Super Lig, other than Ersun Yanal, is Ertugrul Saglam, whose Eskisehirspor side sit 5th in the league table, occupying the last European spot. The 44 year old was in charge of Bursaspor between 2009 and 2013 and won their only title to date in 2010.

The most exciting talent that is playing in Turkey at the moment is wonderkid Enes Unal. Despite only being 16, striker Unal has already attracted the likes of Chelsea and Manchester City, although Bursaspor representatives say he is not for sale. At the age of 16 and three months, he set a new record as the youngest goal scorer in the Turkish top flight after scoring the equaliser in a 1-1 draw against Galatasaray back in August 2013.

Galatasaray’s Semih Kaya has been linked with some of Europe’s elite since his Gala debut in 2009. The 22 year old central defender is now a regular in the Galatasaray defence and has made thirteen appearances for the national side. Kaya has sustained a number of injuries in his relatively short career, but a lengthy run in the side for both club and country might see him become the subject of some serious bids from Europe in the near future.

Former Liverpool and Manchester City winger Albert Riera is currently on the books of Galatasaray, and has been since 2011. Riera spent a year at Olympiacos after leaving Anfield in 2010, and is playing alongside ex-Premier League counterparts Didier Drogba and Emmanuel Eboue at Gala.

Didier Zokora spent three years between 2006 and 2009 at Tottenham Hotspur before heading to Spain to play for Sevilla.  The central midfielder has made 118 appearances for the Ivory Coast, and has been at Trabzonspor since 2011.

Ex-Blackburn Rovers wide man Morten Gamst Pedersen left Ewood Park in 2013 after nine years at the club. The Norwegian international made the switch to Karabukspor in the summer, and the club are currently 8th in the Super Lig.

Finally, bottom of the table Elazigspor signed Englishman Luke Moore in the summer of 2013 after spending his entire in England before his move. Moore began his career at Aston Villa, and enjoyed spells at Wycombe Wanderers, West Brom, Derby County, and Swansea City before moving abroad to the Turkish outfit. Despite being a striker, Moore is yet to score for Elazigspor this season.