Home » News » Should Golden Goal be Brought Back? 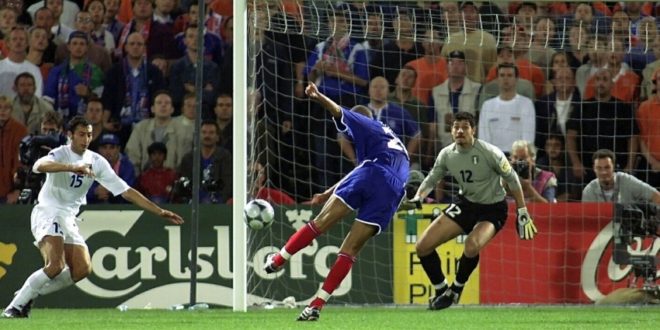 Should Golden Goal be Brought Back?

Now that Euro 2016 has finished, we can assess the tournament format and see whether any changes need to be made. One of the major issues is the 24 team format which has turned out to be a very decisive issue, but another area that has garnered some attention and definitely needs to be addressed is extra time.

Extra time during this tournament felt pointless for the majority of games, it often seemed to be a 30 minute delay until the penalty shoot-out rather than an exciting extension to the game which is what it should be.

This article looks into whether extra time can be improved in any way before the 2018 World Cup with some of the ideas possibly being tested in the 2017 Confederations Cup due to its reduction in importance compared to other major international tournaments.

The first solution is from the realm of recent football history with some writers arguing that it should be brought back in exchange for the scrapping of penalties. However, even now the idea of golden goal isn’t popular with some and was divisive at the time due to the difference between the idea behind it and how it actually worked. Golden goal was no longer used after the 2002 World Cup due to its unpopularity, and inability to sufficiently transform extra time as well as reduce the amount of matches that went to extra time. Although it did have some famous moments such as David Trezeguet’s goal against Italy in the Euro 2000 final which will live long in the memory.

The argument for introducing it relies on the fact that it would make extra time more exciting due to the added risk attached to conceding a goal, but this could take it one of two ways. Either one team sees going on the offensive as worth the risk because the first goal scored ends the game which leads to an open attacking period of extra time because the team putting on the pressure are open to counter-attacks.

Or it could go the other way with both teams being unwilling to take a risk, so it ends up being a cagey affair due to the added pressure on the defenders because of the significance of the first goal scored which causes a drab thirty minute build up to penalties which is usually the case currently.

It all depends on whether UEFA or FIFA want to interfere with the rules or just let the game continue it’s progressive evolution because there is no certain answer for what bringing golden goal back would do and therefore it represents a gamble.

Silver goal is another potential option, but it was just as unsuccessful as golden goal when it was briefly implemented in the 2004 Euros. It could be argued that this method is unfair because the precise moment the goal was scored is crucial which could cause only the ends of both halves of extra time being interesting rather than the full thing. This is because scoring a goal doesn’t end the match, but if the other team doesn’t get an equaliser in that half of extra time then they lose.

One of the few examples of this format is Greece vs. Czech Republic in Euro 2004 when Greece scored in the 105th minute which was right at the end of the first half of extra time, and this gave the Czech’s basically no time to respond. This example reinforces the idea that golden goal might as well be used instead because the end result was the exact same, and therefore silver goal is pointless.

Silver goal is an interesting idea, but it doesn’t seem like the solution to the extra time problems especially because out of the two golden goal seems like the more pragmatic and simplicity along with being practical is usually the best way to go.

The Copa America tournament knockout matches, with the exception of the final, went straight to penalties after 90 minutes had ended which seemed to work because the matches were intense and exciting struggles throughout due to the knowledge that only a slight bit of energy needed to be saved for penalties rather than 30 more minutes.

This decision looked like it had been justified at the 2016 Copa America Centenario because the final went to extra time, and it was a dull affair which was visibly worse than the rest of the match because of the lack of energy and risk in the play.

This would be a bold move for either FIFA or UEFA, but the fact that extra time doesn’t seem to add much to the major international tournaments suggests that it might be time for it to be replaced. However, domestically nothing should be changed because the Champions League and Europa League seem to work perfectly well in their current formats, and this may be due to the away goals rule which reduces the amount of matches that require extra time.

The 2016 Copa America Centenario implemented a new rule which allowed teams to make a 4th substitution, but the effect of this wasn’t obvious due to the final being the only match that didn’t go straight to penalties. The 2016 Rio Olympics are also trying out this rule, so this should be a good initial indication for how successful the rule is although the tournaments isn’t as intense as other big tournaments such as the World Cup due to it not being as prestigious.

Currently there is little evidence for whether this rule is the solution, and the Olympics may show that it works perfectly in energising extra time, but personally it seems a bit of a half measure to me. Giving each team the option to bring on three substitutions in extra time would bring some much-needed energy and impetus that is currently lacking. It would also meant that teams get the chance to replace over half of team during the 120 minutes if you include the three substitutions that we have currently, and this seems like the right balance that is needed.

Substitutions seems like the best solution currently because the Olympics is going to give information relevant to this due to its extra substitution rule, so trying 1, 2, and 3 substitutions in extra time to see which is best would be the smartest course of action. If none of them are sufficient then replacing extra time with penalties is the best way to go because it worked well at Copa America, and therefore golden goal shouldn’t be brought back due to its previous usage showing how ineffective it was.

Three substitutions seems like it would be the best solution if we’re going off little evidence because it seems to be the right balance between changing the format sufficiently to improve extra time, but also not changing the format too drastically which could be unpopular with the fans.