Home » News » Should we have to play teams like San Marino? 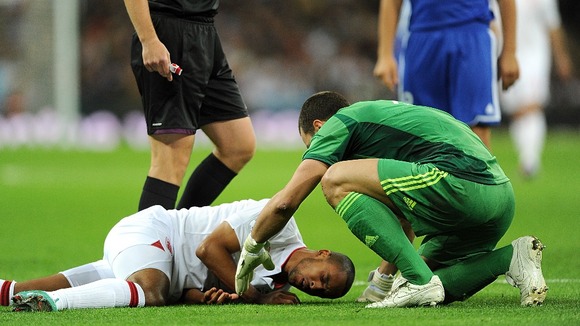 Down and out: Theo Walcott injured following a collision with the keeper

Should we have to play teams like San Marino?

With it being international week, it is only right that this week’s talking point takes on a more global flavour.

On Friday night a bunch of young males took a day off work to take a day trip to London. Among this group was an accountant, teacher and olive oil factory worker, so how did they end up taking on 11 multi millionaires in a stadium three times bigger than their own country’s population, at an activity which is merely a hobby to them?

San Marino first began playing competitive football in 1990 and whilst you can’t deny that everyone should be allowed the chance to take on other nations at the beautiful game, surely their record suggests that putting them up against the best teams in the world is simply pointless.

Who got any satisfaction from Friday night at Wembley? The fans were expecting an even bigger trouncing than 5-0. Danny Welbeck and Wayne Rooney did both score two goals but that would’ve been only their basic requirement against the lowest ranked team in the world. San Marino didn’t even try to compete in the game, they appeared more interested in taking photos of the stadium before the match even kicked off! Joe Hart had nothing to do whilst Theo Walcott certainly didn’t take anything positive from Friday night and now our nation will have to cope without him when they take on an actual footballing nation in Poland on Tuesday. All in all, a waste of time.

San Marino could arguably see a 5-0 loss as a success, given the 13-0 tonking they received against Germany in the not too distant past. They have achieved one victory in their 22 year history; 1-0 against Liechtenstein in 2004. Surely they would love the chance to take on teams of that ilk on a more regular basis?

So come on FIFA, UEFA or whoever else can sort this out – make San Marino and other lower ranked countries have to pre-qualify for the right to make their big trip to the European’s top countries, for the good of us all!!