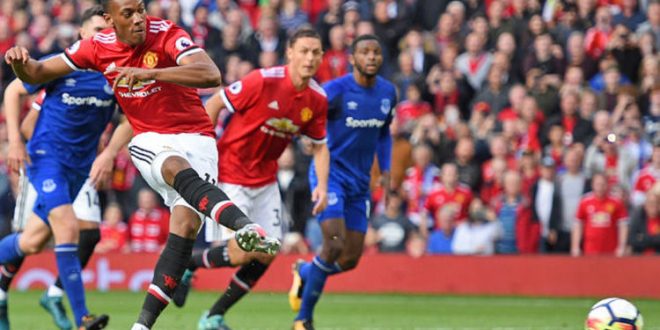 Manchester United recently netted their 100th penalty in the Premier League, an Anthony Martial strike from the spot giving the club an average of four penalty kicks awarded per season in the English top league. On the back of this century of goals, many questions about past spot-kicks have arisen, historic penalties, the best takers and so on, so let’s take a look at United’s past, present, perfect, and not so perfect penalty kicks in the last 26 years of the Premier League.

Number 100 in the club’s spot kick Premier League history goes to Anthony Martial, his perfect penalty in the defeat against Manchester City sets this new record 26 years after Steve Bruce took and scored United’s first 12-yard kick in 1992 against Everton, beating Neville Southall between the sticks. Bruce might have been a defender, but he was deadly from the spot and a regular penalty taker for United until a certain Frenchman’s arrival…

Eric Cantona placed the ball on the spot for United 16 times and converted 14 penalties. In the two matches he missed from the spot (against Blackburn and Leeds) he would make up for not scoring the penalty by scoring in open play later in both games. Perhaps the most famous and poignant of all his penalties has to be the one in his comeback game after his kung-fu kick suspension against Liverpool. It was the perfect penalty, trademark Eric, tight into the corner of the net, his celebration just as impressive, where he spun around the goal net post. Ronaldo is the only other player to only have missed two spot kicks for United along with Cantona, he may have famously missed in the 2008 Champion’s league final against Chelsea in the shoot-out, but he was usually the coolest man on the pitch when called upon from 12-yards. 11 out of 13 is not bad, his most significant nerve-holding spot kicks came during the title run-ins at the end of 2007 and 2008 seasons – United on the edge of Premier League glory, those penalties helping the Old Trafford club to both titles.

After King Eric left United, a quiet retiring Irish man took over from the spot. The ever reliable full-back Dennis Irwin, was a surprise choice to become the main man from 12-yards, however, he turned out to be the perfect penalty pick. Irwin scored United’s 10th penalty in their Premier League history and it was a critical one. Towards the end of the 1994/95 season, he netted against Southampton, in a match in which United trailed, Irwin’s spot kick ensured the title went to the last match of the season keeping dreams of coming top of the Premier League alive. He scored 7 out of 9 spot kicks including two against bitter rivals Liverpool, and as with Steve Bruce, Irwin proved his defending was as superior as his penalties making him a United great.

Near perfect penalty takers Ronaldo and Ruud Van Nistelrooy are two players to top United’s spot kick total list and wow the United crowds with their expertise in the twelve yard department, and of course you cannot discount Wayne Rooney who netted 20 times from the spot from 28 penalties, he also notched United’s 75th spot kick in a 4-3 win against Reading in 2012. With his impressive 20 spot strikes, Rooney can boast he is the best United penalty taker for the Old Trafford club during the Premier League era, he is top of the list when it comes to scoring from the spot with a 71% success rate.

All in all, there have been 24 different penalty takers for United since the Premier League began, all with their own style and way of slotting home from the spot. Each penalty has a story to tell whether it was in a comeback match or it won a critical point in the Premier League title race. Here is to the next 100 red spot kicks and 25th player to score one, both will play a part in the history of Manchester United Premier League penalties. 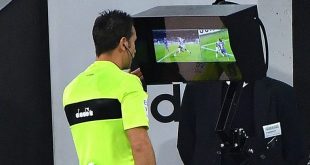 With VAR being used already in top flight leagues in Spain, Italy and Germany, my …