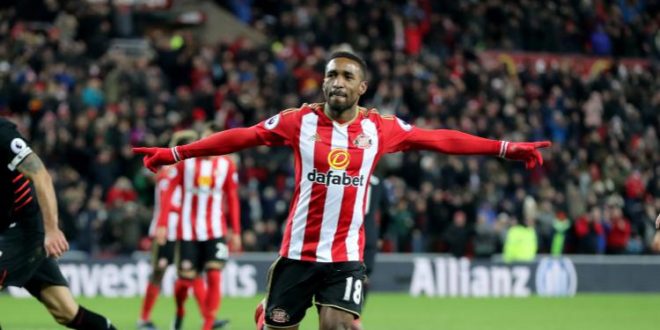 It’s the “New Year” and that means the second half of the season is underway. After an action packed 2016 we are now starting to see the Premier League take shape. Earlier today one of the many fixtures was Sunderland vs Liverpool at The Stadium Of Light.

Daniel Sturridge opened up the scoring on 19 minutes with a dinked header over Vito Mannone after a mishit by Dejan Lovren. Sunderland were then awarded a penalty after Ragner Klavan tripped Didier Ndong. Defoe stepped up to take the spot kick and levelled it to 1-1. In the 72nd minute Sadio Mane put Liverpool back ahead 2-1 with a tap in. On the 83rd minute Mane handballed inside the Liverpool box from a Sunderland freekick and a second penalty was awarded to Sunderland. Who was to take it? Of course, Jermain Defoe. Experience showed from the prolific striker who slotted into the back of the net to make it 2-2. That goal was Defoe’s 11th of the season.

To add worse news for Liverpool Daniel Sturridge had to be taken off with an ankle injury but Jurgen Klopp believes it isn’t serious. The 2-2 draw means Liverpool miss out on 2 points to contend for the title and are now 5 points behind Chelsea who also have a game-in-hand over Liverpool.

Sunderland will take this result as a win as they are fighting to stay out of  a relegation battle. They are 1 point inside the relegation zone but this draw against Liverpool could be a great morale boost for “The Black Cats” . Sunderland only had 29% possession which goes to show you don’t need to have the ball all the time to get a result.

After a busy December, the 3rd round of the FA Cup is upcoming for both of these teams. Liverpool will take on league 2 side Plymouth Argyle at Anfield while Sunderland host Premier League side Burnley.