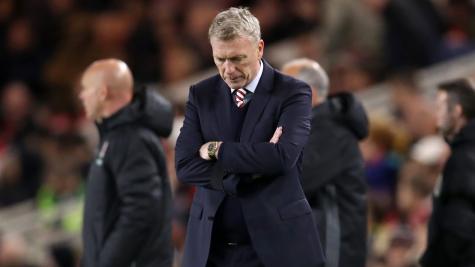 Saturday’s 1-0 defeat at home to Bournemouth confirmed that Sunderland will be playing in the Championship next season. After 10 seasons in the Premier League with little to no success under numerous managers, Josh King’s 89th minute winner proved costly and sent Sunderland into the second tier. This result led to manager David Moyes revealing he would take his time to access the situation over the next few weeks.

Reports over the last couple of weeks had suggested Moyes had held talks over his future with chief executive Martin Bain and owner Ellis Short with the club’s future in the lower division an obvious outcome of the season. It was reported the Scot was ready to leave the Stadium of Light but will now not decide on his future till the season has ended. This news comes after Moyes had commented on his desire to spearhead a rebuilding programme to help the club if they get relegated by first taking stock of what the club needs to start a fresh and gain promotion back to Premier League.

This news adds to an already miserable season for Sunderland and their supporters. Their financial situation reflects this with recently the club reporting a loss of £33million after tax for the year up to July 2016 with a net debt of over £100million. Recruitment wasn’t much better for the Black cats with around £30million spent with no real positive outcomes, Moyes business in the window can only be a disappointment.

Things on the pitch have not been any better, a team heavily reliantly on striker Jermain Defoe, who himself has not scored a goal since February. With only one win in the whole of 2017, things just keep getting worst for the red and whites. The negatives just keep appearing with Sunderland only managing to score in three of their games this year, there is no doubt they deserve to be relegated. The defense doesn’t get any plaudits either, a defense mixed with experience and youth has only kept four clean sheets all season. The only positive to come from the back line is the rise of young keeper Jordan Pickford who will surely not be at the club next year. The young stopper has had limited support from his outfield team mates and has made some world class stops which have caught the attention of Arsenal.

The Championship is not an easy league to escape, as proved by Aston Villa and Norwich this season who both finished mid table. Bringing in players with experience in the division is key alongside having a good blend of youth and experience, something Sunderland may find hard to exercise next season. Experienced players such as John O’Shea, Seb Larsson, Steven Pienaar, Joleon Lescott and Victor Anichebe all run out of contracts. These players alongside Jan Kirchoff and Jermain Defoe who can both also leave on free transfers is not good news for Sunderland.

Obviously, they still have some good players who can do a job such as youngsters, Duncan Watmore and Paddy McNair but will these players stick around or will they want their move back to the Premier League, only time will tell.