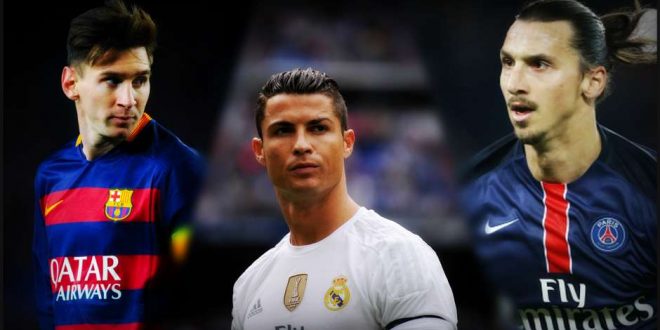 It is a very exclusive club, only three active footballers are currently members, those players being a trio of outstanding talent, tremendous stamina and skill, the best at it in the world, and all of them have scored five tons of goals in their footballing career making them part of the incredible elite 500 goals club. Cristiano Ronaldo, Lionel Messi and, joining the union most recently, Zlatan Ibrahimovic make up this prestigious group, but which of these 500 goals, and still counting, scorers is the greatest? Who’s run to this magical net ripping number is the best? Can they really be separated? And, who could potentially join the 500 club in the future, if anyone? Which past players have also reached this remarkable feat?

The first player out of the three to reach the magic 500 goals tally was Ronaldo. The former Manchester United and Real Madrid sensation reached this marvellous milestone in September 2015 scoring two goals against Malmo for Real Madrid in the Champion’s league – his 500th and 501st career strikes. Of course, scoring over 500 goals is spectacular (he has now scored more than 600) and propels any player into the football hall of fame, but for Ronaldo, it is more than the goals that make him one of the greatest, if not the best footballer of all time. His speed and skill have accounted for his wonderous status, the type of goals he scores – free-kicks, left/right foot, headers – his goal assist rate – there really isn’t anything Ronaldo hasn’t and cannot do. Being a member of the 500 club is incredible for Ronaldo, but quite phenomenally, this star player brings so much more to the pitch and world football.

Just over six months after Ronaldo’s 500th career strike, Lionel Messi joined him in the current player 500 club when he notched this stunning feat in a 2-1 defeat at home to Valencia. 11 years after scoring his first goal for Barcelona, as a 17 year old against Albacete, the La Liga sensation, like Ronaldo, has much more in his locker than goals, however it did take him longer than his rival to reach the magic 500 mark. His all round play, touch, skill and pace is special to watch aside from net ripping stunners, every time this wonderous footballer comes forward on the pitch anticipation rises calling for his former boss Luis Enrique to describe the Argentinian ace as ‘a figure from another galaxy.’

Last month Zlatan Ibrahimovic joined this elite club of 500 goals plus when he netted for his current club LA Galaxy. This iconic wonderful warrior of a player, may have grabbed his half a century of goals late into his career and be significantly older than Ronaldo and Messi, but you cannot dismiss what a great feat this is for the Swedish star and what he has brought to the game as well as what a phenomenal footballer is he. His longevity in the game is as much to marvel at as the goal tally, still playing at the top at the age of 35 with Manchester United and a league winner for 4 different clubs is another magnificent feat – his legendary status in the game confirmed way before joining the 500 club, this being just another fantastic achievement in this players long outstanding career.

These are the current big three, and a tremendous trio they are, all of them lighting up the world of football, but there was a footballing era before these legends of players that clocked 500 goals and formed an historic unique club of their own, but were they as good as this current group? Of course football has changed in so many ways over the years so comparisons can be difficult, either way, looking back at any player that can hit the back of the net over 500 times has to be worth a look…

Of course Pele, one of the greatest, if not the best player football has ever seen scored an incredible 767 goals so there is hope for Ronaldo and co yet to grab even more net ripping strikes! The brilliant Brazilian needs no introduction or stressing just how good he was, it’s all in the name; ‘Pele’ – and you think world class as well as a member of the old 500 plus club. A fellow countryman joins Pele as a wonderous top scorer is Romario. Sometimes volatile and opinionated, whatever this player’s character, you cannot argue with him scoring an unprecedented 772 career goals. ‘A genius of the goal area’ are words used to describe this fabulous footballer, summing him up perfectly. The leading goal scorer of all time is Austrian Josef Bican with an extraordinary 805 strikes hitting the back of the net. This all-time super striker’s career took off in the 1930’s, the goals began flowing in his native country but it was his move and 11 year stay with Slavia Prague that saw him score 534 goals in 274 appearances taking his tally to the top of the list of football goal-getters. A fantastic forward he was, and it gives Ronaldo, Messi and Ibrahimovic food for thought, could one of them overtake Bican? It’s an incredible aim and an intriguing watch for football fans, but the real question is who is next to attempt to join the 500 goal club?

The obvious name that springs to mind in British football is of course Harry Kane. The Spurs front man has already scored 181 goals, at still the young age of 25 and a deadly finisher in front of goal, Kane has to be considered a cert to join the illustrious 500 club. Another English player to throw into the mix is Marcus Rashford, however with only 38 goals to his name for club and country due to less appearances than Kane, can the United striker find the net enough times to ever reach the dream 500 goals? Age is on his side at only 20 years old, and the goal scoring talent is there for all to see, first team starts will be the difference as to whether Rashford can also be a part of the 500 goal group.

Looking into Europe, the player on everyone’s lips and one that could easily break all kinds of records as well as hit the 500 club with aplomb is Kylian Mbappe. The fantastic French forward is only 19, but to date has a staggering 72 goals for club and country. His skill and talent has left the footballing world staggered, stay injury free and he could be challenging Josef Bican for his goal record.

The names in this group are legends, past and present, achieving a stunning feat. The 500 goal club – it’s special, spectacular and reserved only for the best.