Home » News » The Premier League to an American: Volume 1 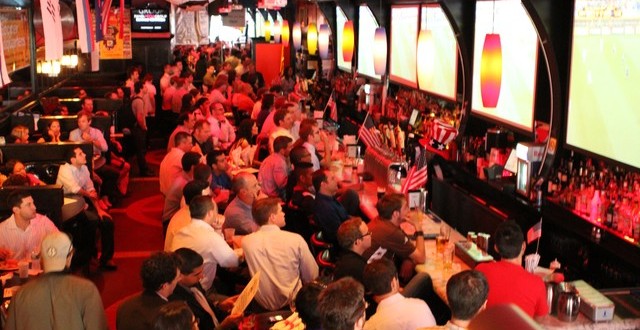 Football pubs in the US are on the rise

The Premier League to an American: Volume 1

One of the truly American sports traditions out there is the art of tailgating. For the uninitiated, tailgating is the practice of grilling, eating, and drinking various foods and liquids in anticipation of a sporting event. It is common practice prior to American Football games and is used also for MLS games and car races (NASCAR). Anyways, for the American fans of the EPL, there was to be no better way to “ring in” the start of a new season than to stay up all night and tailgate in pure excitement. All over the country the practice took place with restaurants and bars opening at 4am, beer taps flowing at 6am, and grills sizzling in time for Liverpool vs. Stoke. By the time Sturridge grabbed the opening goal in the 37th minute, the taps were already half-empty, the second round of sausages had hit the grill, and drunken chants of YNWA battled with equally drunk renditions of Delilah.

If you wanted a brew by the time Villa vs. Arsenal began, you would have to head out to the local grocery or convince store to fill your alcohol craving. Regardless, it was still a good time to be had by all as the sobering up began around the time Benteke put in his second penalty and ended with Luna crushing Arsenal’s hope of a comeback. The grills yet again fired up around lunchtime as we all gathered around to see RVP single handedly destroy Swansea on the big NBC channel before we bid our goodbyes for the lengthy span of less than a day before we gathered again the next morning and found the same seats for Crystal Palace vs. Tottenham. That is the typical weekend life of an American EPL fan, and luckily for us we have 37 more weeks to do it all again.